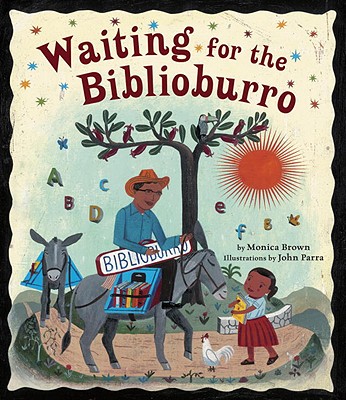 Ana, the protagonist of Waiting for the Biblioburro, lives in a remote farming town. A long-gone schoolteacher once gave her a book, which she treasures, but she craves more stories.

One day, a man comes through town with books loaded on his burros. He reads stories to the children and lends them all books. Ana loves having more stories to read and tell to her brother. While waiting for the librarian to return, she makes a book that tells the story of the man with the biblioburros. She presents him with her book on his return, and he adds it to his library to share with children in another town.

Brown’s book is striking in its omissions. Not only is Soriano Bohórquez never named, but the story is never located in a town or even a country. The only mentions of Luis Soriano Bohórquez and Colombia are in the author’s note at the end of the book, easily overlooked.

The lack of concrete place names mirrors the lack of proper names throughout the book; the only named characters are Ana and the two burros, Alfa and Beto. This lends the entire story a dreamlike quality that is encouraged by John Parra‘s illustrations.

Removing Soriano Bohórquez’s name and intent creates a child-centered narrative that emphasizes personal charity over collective liberation, and ignores the lived political realities of the Colombian people in favor of a wish-fulfillment story.

The author seems to think that children can only digest a book that centers a child’s concerns so completely as to eclipse almost any other perspective.

Both Waiting for the Biblioburro and Biblioburro: A True Story from Colombia, in the opinion of this reviewer, manifestly underestimate children’s ability to accept what is real.

Waiting for the BiblioBurro by Monica Brown
Illustrator: John Parra
Published by Tricycle Press on 2011
Genres: Books and Libraries, Peace
Pages: 32
Reading Level: Grade K
ISBN: 9781582463537
Review Source: Teaching for Change
Buy at Powell's Books
Also by this author: Marisol McDonald and the Monster, Side by Side/Lado a lado

SYNOPSIS: Ana loves stories. She often makes them up to help her little brother fall asleep. But in her small village there are only a few books and she has read them all. One morning, Ana wakes up to the clip-clop of hooves, and there before her, is the most wonderful sight: a traveling library resting on the backs of two burrosall the books a little girl could dream of, with enough stories to encourage her to create one of her own. Inspired by the heroic efforts of real-life librarian Luis Soriano, award-winning picture book creators Monica Brown and John Parra introduce readers to the mobile library that journeys over mountains and through valleys to bring literacy and culture to rural Colombia, and to the children who wait for the BiblioBurro. A portion of the proceeds from sales of this book support Luis Soriano's BiblioBurro program. From the Hardcover edition.