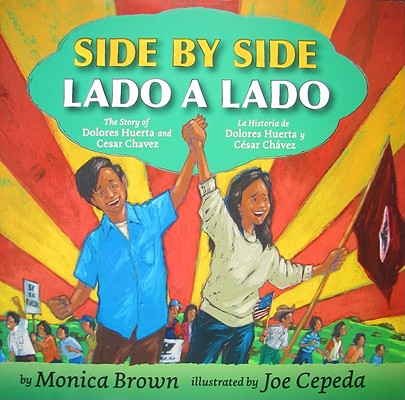 Growing up, my mother told us we had to boycott grapes. At that time, I only understood farmworkers were treated badly and Cesar Chavez was helping them. Years later, I’ve found a bilingual children’s book that would have helped me understand, not only the history of the farmworker movement, but who Cesar Chavez was and how he and Dolores Huerta worked together to inspire a national consciousness about the treatment of farmworkers. I love that this book introduces Dolores and Cesar as children and connects their early life experiences to the decisions they made as they grew up. I value the discussion of poverty, which the author introduces by explaining that Cesar’s family ended up working as migrant farmworkers after they lost their home. Given the shame and confusion children are apt to feel when their family faces eviction and/or loss of a home, the book offers an important perspective on family displacement by following Cesar throughout the loss, showing how it impacted his life as an activist for human dignity. It also does a good job of showing how a teacher, Dolores Huerta, became a social justice leader, adding a texture and dimension to those in the teaching profession that students might not otherwise get an opportunity to witness.

The illustrations by Jose Cepeda really welcome readers into the story and younger children will be engaged visually. His illustrations are lively and are reminiscent of comic book characters. Continue reading.

Publisher's Synopsis: Every day, thousands of farmworkers harvested the food that ended up on kitchen tables all over the country. But at the end of the day, when the workers sat down to eat, there were only beans on their own tables. Then Dolores Huerta and Cesar Chavez teamed up. Together they motivated the workers to fight for their rights and, in the process, changed history.

Award-winning author Monica Brown and acclaimed illustrator Joe Cepeda join together to create this stunning tribute to two of the most influential people of the twentieth century.