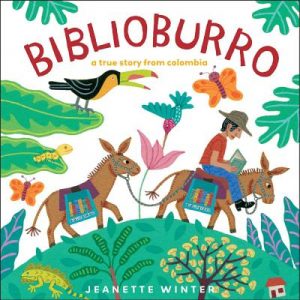 Biblioburro: A True Story from Colombia takes a more accurate approach to the story of Soriano Bohórquez, according him a first name and the story a location. The story introduces Luis, who likes to read. He acquires too many books, and his wife, Diana, complains. He gets the idea to share his books with children, and loads up his burros with books. On his way to a village, he meets a bandit, who steals one of his books. He reaches the village and reads a book about pigs to the children, then returns home to eat dinner and read late into the night.

The book matter-of-factly depicts the amount of work and danger that the bibliotecario faces each day that he sets out on his rounds, rather than presenting him as a Johnny Appleseed-style figure that simply appears when he is most needed. However, it still leaves out wider political context, recasting a real-life incident in which Soriano Bohórquez was accosted by a group of paramilitaries as an encounter with a single “bandit.”

The book has other significant missteps. Winter’s illustrations, while beautiful, present Colombia as a cartoon jungle full of oversized animals and few, if any, houses, contributing to the U.S. stereotype of foreign countries (especially those in the Global South) as exotic and backwards.

Winter also decides to portray Diana, Soriano Bohórquez’s wife, as a shrew and a drudge. In the book, her irritation at the growing piles of books induces Soriano Bohórquez to think of the Biblioburro. She packs his books onto the burros and, when he returns, cooks him dinner. The few actions allowed her make her seem entirely adjunct to her husband.

In reality, Diana also helped to build the library, making it unlikely that she would berate her husband for collecting books. In addition, the couple runs a small restaurant to make their living, which means that she would have little time to assist him in his daily routine.

Both Biblioburro: A True Story from Colombia and Waiting for the Biblioburro, in the opinion of this reviewer, manifestly underestimate children’s ability to accept what is real.

SYNOPSIS: A man, his burros, and his books bring joy to children in remote Colombian villages in this inspiring book based on a true story.