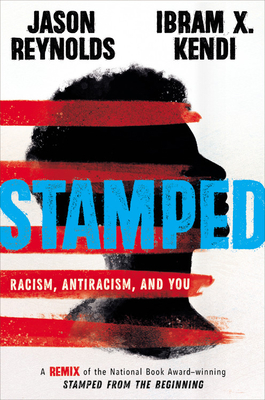 I didn’t begin to appreciate nonfiction until my adult years. During my childhood, nonfiction I think was primarily written for for adults; particularly white, male adults. Even more so, it was a dry, informational text, a text that led readers to think it was delivering honest, bias free, factual information.

I did enjoy reading as a teen and during my 12 years in majority white schools, I managed to develop the insight that I was not included in the history and literature books from which I was taught. (My classes were about 97% White.)  I somehow began to question where Black people should be in the stories I read.

Teens today still itch for a take on US history that accurately describes how all people have participated in this democracy. In too many instances, this information continues to be something they have to actively seek out. Ibram X. Kendi hoped to remedy this when he recruited Jason Reynolds to write Stamped: Racism, Antiracism and You (Little, Brown, 2020). Lawrence Goldstone felt the same and wrote Stolen Justice The Struggle for African American Voting Rights (Scholastic Focus, 2020).

Reynolds, an African American man degreed in English, is known for his award-winning middle grade and young adult novels. He currently serves as the National Ambassador for Young People’s Literature. Stamped, he says is not a history book because believes that young people don’t like history. He knows fully well what he’s working with in terms of content and audience. For him, written language is an artform that positions readers while entertaining and informing. He writes in a style that lets him connect directly with his readers.

About Jefferson. You know how I said Gomes Eanes de Zurara was the world’s first racist? Well, Thomas Jefferson might’ve been the world’s first White person to say, “I have Black friends.” I don’t know if that’s true, but I’m willing to make the bet. He was raised non-religious in a house where Native Americans were houseguests, and Black people, though slaves, were his friends as far as he could tell. As a young man, he didn’t think of them as less or consider slavery much at all. As a matter of fact, Jefferson didn’t even really see them as slaves. It wasn’t until he was older, when his African “friends” started telling him about the horrors of slavery — including the terror in his own home — that he realized their lives were more different than he’d even known. And how could they not be? His father had built the second-largest plantation in Albermarle County, Virginia, and I don’t know about you all, but I don’t own my friends. (p. 43)

Reynolds’ remix is premised upon Kendi’s work, but all tellings of history are premised upon truths and are confined to the facts they uncover. What the author chooses to detail and what language they choose to portray those details is how they bias their readers. Here, not only does Reynolds work to relate to his readers but, he does so with unequivocal bias. The educator and librarian in me wants to throw out all kinds of flags to be sure the readers know how they are being positioned here, but the little Black girl in me smirks and says “right on!”.  I do want to know to what nation those Native Americans belong and I do want pushback on some of this history but what I really want to question is how well young readers appreciate this telling of history because, no matter what the spin it’s still a history book. Does Reynolds successfully get his readers not only to ingest this history but, to become part of it by doing the anti-racist work methodically laid out in the book?

Neither Reynolds nor Goldstone flinches when naming racism or white supremacy. They detail stories of our founding fathers that most books intended for adults refuse to admit. Goldstone writes of the inconsistencies in the US judicial system that consistently denies voter access to Blacks while Reynolds makes the courageous acts of antiracists visible. I think Stamped is flawed in a way similar to Stolen Justice in that they both span too great a time, choosing to go wide rather than deep. Goldstone begins his description of the voting rights struggle for Blacks in 1898 and moves through to the 1960s, concluding with a few paragraphs about events in the 21st century.

Is there bias in Goldstone’s book? Just consider the title: Stolen Justice.

Lawrence Goldstone is a white, Jewish, male author who writes nonfiction and fiction for adults and young people. He earned his PhD writing a dissertation on the underemphasized role of slave economics at the Constitutional Convention of 1787. He’s written three previous books on the Constitution, the Supreme Court and the rights to full citizenship for Blacks in the US. Stolen Justice is part of series with Scholastic which includes last year’s Unpunished Murder: Massacre at Colfax and the Quest for Justice. Continue reading.

Publisher's Synopsis: The #1 New York Times bestseller and a USAToday bestseller! A timely, crucial, and empowering exploration of racism — and antiracism — in America

This is NOT a history book.This is a book about the here and now. A book to help us better understand why we are where we are.A book about race.

The construct of race has always been used to gain and keep power, to create dynamics that separate and silence. This remarkable reimagining of Dr. Ibram X. Kendi's National Book Award-winning Stamped from the Beginning reveals the history of racist ideas in America, and inspires hope for an antiracist future. It takes you on a race journey from then to now, shows you why we feel how we feel, and why the poison of racism lingers. It also proves that while racist ideas have always been easy to fabricate and distribute, they can also be discredited.

Through a gripping, fast-paced, and energizing narrative written by beloved award-winner Jason Reynolds, this book shines a light on the many insidious forms of racist ideas — and on ways readers can identify and stamp out racist thoughts in their daily lives.