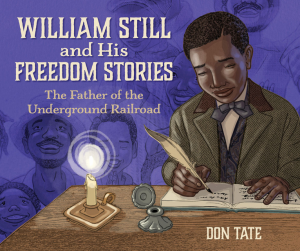 Until author and illustrator Don Tate learned about William Still from a dictionary of Black Americans, the only name he knew of a Black conductor on the Underground Railroad was Harriet Tubman. Determined to make sure future generations are not limited to the single hero, he wrote about William Still, who himself was a chronicler of history.

Still was from a family who had escaped slavery, tragically having to leave two children behind. Still devoted much of his life to writing the stories of people who escaped slavery in an effort to help reunite them with loved ones. One of the people who came to Still’s office in Philadelphia to share his story was his older brother Peter. As a result, Peter and his mother reunited after 42 years. Still’s careful documentation is used by researchers today. Tate’s book can introduce young readers to the horrors of slavery and the strategies used by African Americans to escape and to reconnect with family.

William Still’s parents escaped slavery but had to leave two of their children behind, a tragedy that haunted the family. As a young man, William went to work for the Pennsylvania Anti-Slavery Society, where he raised money, planned rescues, and helped freedom seekers who had traveled north. One day, a strangely familiar man came into William’s office, searching for information about his long-lost family. Could it be?

Motivated by his own family’s experience, William Still began collecting the stories of thousands of other freedom seekers. As a result, he was able to reunite other families and build a remarkable source of information, including encounters with Harriet Tubman, Henry “Box” Brown, and William and Ellen Craft.

Award-winning author-illustrator Don Tate brings to life the incredible, stranger-than-fiction true story of William Still, a man who dedicated his life to recording the stories of enslaved people fleeing to freedom. Tate’s powerful words and artwork are sure to inspire young readers in this first-ever picture book biography of the Father of the Underground Railroad.