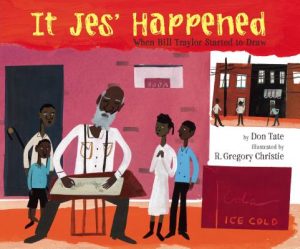 It Jes’ Happened: When Bill Traylor Started to Draw is a biographical children’s book about the  African American folk artist who started drawing at the age of 81 and produced over 1,000 drawings and paintings by his death at the age of 95. It chronicles his life experiences that eventually spilled into his pictures, from growing up as an enslaved child on an Alabama plantation, to marrying and raising a family as a sharecropper, to becoming an artist while living on the streets of Montgomery. The author weaves actual quotations from Traylor into the story, but these are sparse as he was not well-known in his time, and he revealed little about himself and his art when asked. Thus, It Jes’ Happened puts Traylor’s artwork in context while leaving plenty of room for readers to wonder—just as Traylor did.

Tate’s portrayal of Traylor’s relationship with Charles Shannon, a white artist and collector, is appropriately nuanced. Traylor accepts some of the expensive art supplies Shannon buys him, but also continues to use his preferred found materials. When Shannon organizes an exhibition of Traylor’s work in 1940, the gallery-goers are (of course) all white, and there is potential for young readers to get the impression that Traylor’s work was only important because a white collector deemed it so. Shannon was undeniably key in garnering recognition for Traylor’s work (the Afterword elaborates on how Shannon pushed to have Traylor included in a folk art exhibition at the Corcoran Gallery of Art in Washington, D. C., in 1982). Furthermore, Tate makes sure to center Traylor, making it clear that showing and selling art was never his motivation, and that his identity as an artist did not change based on his audience.

Besides the relationship with Shannon, there are a few other points in the book that may unintentionally give young readers the wrong idea. On one page, we see Traylor talking about his work with several African American admirers, but once Shannon comes on the scene, we do not see another African American person interacting with Traylor or his work. Also, Tate’s description of Traylor’s work focuses on his style, using basic lines and shapes to create human and animal forms, which is accurate but ignores the complex symbolism of the artwork.

It Jes’ Happened tells a story children should know, with the help of Christie’s beautiful illustrations that nod to Traylor’s distinctive style. It is important for teachers and parents to help contextualize the story. The Smithsonian American Art Museum (SAAM) published several useful resources in conjunction with their 2018 exhibition “Between Worlds: The Art of Bill Traylor,” including a playlist of period music and a visual timeline that places Traylor’s major life events against the backdrop of the Civil Rights Movement. The teachers’ guide for grades 7-12 focuses on essential questions such as “Whose stories get told? To whom? By whom?” and includes a well-structured activity to help students analyze one of Traylor’s drawings for its aesthetic and symbolic content.

Publisher's Synopsis: Growing up as an enslaved boy on an Alabama cotton farm, Bill Traylor worked all day in the hot fields. When slavery ended, Bill's family stayed on the farm as sharecroppers. There Bill grew to manhood, raised his own family, and cared for the land and his animals. By 1935, Bill was eighty-one and all alone on his farm. So he packed his bag and moved to Montgomery, the capital of Alabama. Lonely and poor, he wandered the busy downtown streets. But deep within himself Bill had a reservoir of memories of working and living on the land, and soon those memories blossomed into pictures. Bill began to draw people, places, and animals from his earlier life, as well as scenes of the city around him. Today, Bill Traylor is considered to be one of the most important self-taught American folk artists. Winner of Lee & Low's New Voices Award Honor, It Jes' Happened is a lively tribute to this man who has enriched the world with more than twelve hundred warm, energetic, and often humorous pictures.