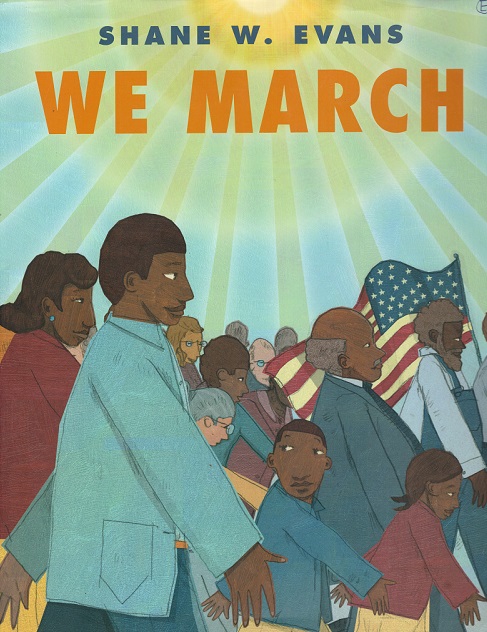 The 1963 March on Washington for Jobs and Freedom is popularly remembered as the backdrop for Dr. Martin Luther King Jr.’s now-famous speech.

We March tells the story of the March on Washington from the perspective of the marchers — in particular, one family that participated.  Two parents and their two children — none of whom is named — rise that morning, meet with others in their church community to prepare, and then join the thousands of other unnamed people who participated in the march. To tell the story of the march through the eyes of an ordinary family is a brilliant way to shift the focus from Dr. King as an individual hero to the role of everyday people in movements for social change. We see images of Dr. King, but respectfully, he is not named.

Whereas most children’s books about the march or about Dr. King focus on “his” dream, We March ends by saying we march to our dreams.

The story of this book, much like the countless stories that drove the modern Civil Rights Movement (some of which we know, but many we never will), is about everyday people taking collective action. That is an anti-bias, anti-racist lesson we want all children to learn.

We March illustrates and honors the role Black churches played in the modern Civil Rights Movement. They served as important organizing and communications hubs in their communities, linking congregations to local and national organizing efforts. Many of the church leaders were among the most prominent civil rights leaders locally and nationally, from the ministers and deacons of the church to the women, who served as back bones of their churches, communities, and the movement. Civil rights organizations like the Southern Christian Leadership Conference (SCLC) were anchored by church communities, and many aspects of the movement (like freedom songs) borrowed from Black faith traditions.

The protest signs in this book themselves can be the subject of conversations with children and invite us adults to reflect. Many of the signs say “Freedom.” What does freedom mean? The marchers wanted for Black people — all people, but specifically African Americans — to be treated fairly and have the same opportunities, access, and justice that white people enjoyed.

Note that the themes on the signs reflect the themes — and DEMANDS — of the march. Yes, the March on Washington for Jobs and Freedom had a list of 10 demands. The demands are worth reading, but also note that from the abolitionists to the modern Civil Rights Movement to the Black Panthers to Black Lives Matter and the Movement for Black Lives, “freedom” has never been vague or hypothetical. Organizers have always had a set of demands that accompany calls for freedom, and those are worth learning about. We highly recommend you read and discuss those demands as a follow-up to the book.

Another strength of this book is the inclusion of singing at the march. We can’t hear them, but the book shows and describes the marchers singing. Music has always had a role in protest, but the freedom songs of the 1960s not only played a key role in the Civil Rights Movement, those songs left an imprint on the fabric of this country.

Finally, We March visibly shows that the struggle for freedom and justice was not fought by African Americans alone. In the crowds we see people of different skin colors and races participating, which was true then, and is true now.

Publisher's Synopsis: On August 28, 1963, a remarkable event took place — more than 250,000 people gathered in our nation's capital to participate in the March on Washington for Jobs and Freedom. The march began at the Washington Monument and ended with a rally at the Lincoln Memorial, where Martin Luther King Jr. delivered his historic "I Have a Dream" speech advocating racial harmony. Many words have been written about that day, but few so delicate and powerful as those presented here by award-winning author and illustrator Shane W. Evans. When combined with his simple yet compelling illustrations, the thrill of the day is brought to life for even the youngest reader to experience.

We March was one of Kirkus Reviews' Best Children's Books of 2012 and is an important story about the African American civil rights movement.