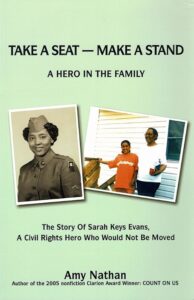 Take a Seat – Make a Stand: A Hero in the Family tells the story of Sarah Keys Evans, a key figure in the Civil Rights Movement. The story of Keys Evans’ bravery and perseverance is often brushed over in history curricula today. Few know that at just 22 years old, on Aug. 1, 1952, Keys Evans refused to give up her seat on a state-to-state charter bus, prompting the landmark court case, Sarah Keys v. Carolina Coach Company, in which the Interstate Commerce Commission outlawed prejudiced seating rules on state-to-state buses.

Eligible for leave, WAC private Sarah Keys Evans was excited about going home from Fort Dix to North Carolina to see her family.

On August 1, 1952, Keys Evans boarded a bus in Trenton, New Jersey. Because the bus traveled straight through (she had no changes to make), she knew she had the right to sit where she pleased. She chose a seat in the middle of the bus as the back of any bus tended to be hotter and bumpier than the forward section. In addition, unpleasant smells from the engine frequently drifted in the rear windows.

Near midnight, the bus reached Roanoke Rapids, North Carolina, where a new driver was to take over. As was the custom, the new driver went through the bus and re-checked tickets. When he came to Sarah Keys, he asked her to move to the back of the bus. A white marine boarded the bus at Roanoke Rapids, and Keys Evans was told to give him her seat.

Sarah was groggy from sleep but knew her rights. She refused.

The driver proceeded down the aisle, but that was not the end of the issue. As the driver returned to the front of the bus, he announced that all passengers were moving to a different bus with one exception: The woman who refused to change her seat was to stay on the bus as long as she wanted, because she would not be continuing on the route.

Moments later, two policemen came into the terminal. Each one took Sarah by an arm and took her to a patrol car for a ride to the police station. When she asked to call her family, she was told that they would make the phone call for her.

When she arrived home, her parents were frantic, not knowing what happened to her. She realized the police never called. [From America Comes Alive.]

Keys Evans’ action preceded the Montgomery Boycott. Though not the first civil rights movement figure to refuse to give up a seat, Keys Evans helped lay the foundation for protests for years to follow. Her story is seldom told, which is why Take a Seat—Make a Stand is such an important book. Author Amy Nathan self-published Take a Seat because commercial publishers told her they already had a book on Rosa Parks, or that Sarah Keys Evans wasn’t famous so nobody would be interested.

Nathan makes the story accessible for young readers, while not shying away from the brutality faced by African Americans during this time. Nathan explains how a victory in court doesn’t always solve the problem, alluding to negligence of the ruling (especially in southern states, where the ruling was not always enforced) and attacks on African Americans who exercised their new rights. With photos of Sarah Keys Evans and her family throughout the book, Take a Seat—Make a Stand: A Hero in the Family is highly recommended.

Take a Seat -- Make a Stand: A Hero in the Family by Amy Nathan
Published by iUniverse on December 1st 2006
Genres: African American, Civil Rights Movement
Pages: 96
Reading Level: Grades 3-5, Grades 6-8
ISBN: 9780595417612
Review Source: Teaching for Change
Also by this author: Round & Round Together

Publisher's synopsis: This book tells of Sarah Keys Evans, an unsung Civil Rights hero. As a young woman in the Women's Army Corps in 1952, she did what Rosa Parks did-three years "before" Rosa Parks. Sarah Keys Evans kept standing up for her rights until victory was won. Her story shows that an individual can have an impact on history, and that in troubled times ordinary people can step up and accomplish remarkable things. Her story also shows that change is a step-by-step process. Many small contributions along the way help to bring about big shifts in attitudes and laws.
"Sarah Keys, a courageous Army private, helped set the stage for the civil rights movement in the 1950s by seeking and getting a legal ruling outlawing discrimination on seating on buses and proving that justice can be there for each of us."
Wilma L. Vaught, Brigadier General, USAF (retired); President, Women In Military Service For America Memorial Foundation, Inc.
"Sarah Keys fought her battle against segregation and humiliations as a matter of moral decency and learned first hand about mental and physical fear thus exemplifying extraordinary courage."
Representative Major R. Owens, U.S. House of Representatives; from a proclamation issued March 2006 "Perfectly pitched to its target elementary audience. Nathan strikes just the right balance of emotion and facts necessary to reach children within the context of a history lesson. A winner." -Kirkus Discoveries