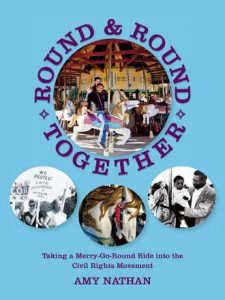 One of my earliest childhood memories from back in the Fifties was asking my mother if the family could go to Palisades Amusement Park right after watching a TV commercial featuring kids enjoying its rides and swimming pool. My hopes were dashed when she patiently explained that we couldn’t because colored people weren’t allowed in.

Who knows whether a kid ever fully recovers from having it ingrained in your brain at such a tender age that you’re a second-class citizen? And yet, just such a scenario ostensibly played out in millions of other African-American homes back then, even that of Dr. Martin Luther King, who specifically referred to his frustration with precisely the same predicament in his historic Letter from a Birmingham Jail.

For this reason, America owes a debt of gratitude to Amy Nathan for writing Round & Round Together, a welcome reminder of the ten-year struggle to integrate Baltimore’s Gwynn Oak Amusement Park. Continue reading.

Publisher's Synopsis: "A snapshot of the civil-rights movement in one city provides insight into the important role of individual communities as change moved through the country…a case study of how citizens of one city both precipitated and responded to the whirlwind of social change around them."—Kirkus Reviews
"A profoundly moving tribute to the intrepid unsung heroes who risked their lives to help bring an end to Baltimore's Jim Crow Era."—Kam Williams, syndicated columnist
On August 28, 1963—the day of Martin Luther King Jr.'s famous "I Have a Dream" speech—segregation ended finally at Baltimore's Gwynn Oak Amusement Park, after nearly a decade of bitter protests. Eleven-month-old Sharon Langley was the first African American child to go on a ride there that day, taking a spin on the park's merry-go-round, which since 1981 has been located on the National Mall in front of the Smithsonian Institution in Washington, D.C. Round and Round Together weaves the story of the struggle to integrate that Baltimore amusement park into the story of the civil rights movement as a whole.
Round and Round Together is illustrated with archival photos from newspapers and other sources, as well as personal photos from family albums of individuals interviewed for the book. There is a timeline of major Civil Rights events.
"Amy Nathan's book deftly describes the courageous struggle by blacks and whites to end discrimination in the park, the city, and the nation. Readers will walk away with a clearer understanding of segregation and the valiant Americans who fought against this injustice."—Debra Newman Ham, Professor of History, Morgan State University
"Round and Round Together tells the inspiring story of how a generation of college and high school students provided the energy and enthusiasm that ended racial segregation in Baltimore's Gwynn Oak Amusement Park and changed the direction of Maryland's history."—James Henretta, Professor Emeritus, University of Maryland
"With clarity and passion, Amy Nathan portrays the struggle of everyday citizens to end racial segregation in Baltimore. This compelling history, for and about young people, is simple but profound like freedom itself."—Taylor Branch, Pulitzer Prize–winning author of the trilogy America in the King Years