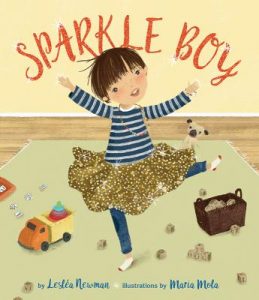 Sparkle Boy by Leslie Newman starts with a common sibling interaction: Casey wants something his older sister has. In this case, it is a sparkly skirt. It becomes a pattern, with Casey drawing inspiration from his sister Jessie’s skirts, nail polish, and jewelry. Each time, Jessie is upset because she believes that these aren’t things that boys should wear or like, but she is reminded by her parents and grandmother that although Casey’s style may be unconventional, it is in no way unacceptable. Finally, at the end of the book, Jessie and Casey’s mother takes them to the library, where Casey is mistaken for a girl and made fun of for dressing the way he does. Jessie stands up for him, echoing what her parents told her when she was unsure about Casey’s choices.

Although the story is fairly simple, it deals with complex issues and ideas. We see both the unwavering support of the adults in Casey’s life, as well as the tensions with his sister that come not from a place of maliciousness but rather from a lack of understanding. We also see many common sibling dynamics at play, as Jessie and Casey learn to share with and stand up for each other. Ultimately, we see how easily Jessie grows and learns to accept her brother, and the potential for such growth among the other children who tease Casey, who sound an awful lot like Jessie at the beginning of the book.

Publisher's synopsis: Casey loves to play with his blocks, puzzles, and dump truck, but he also loves things that sparkle, shimmer, and glitter. When his older sister, Jessie, shows off her new shimmery skirt, Casey wants to wear a shimmery skirt too. When Jessie comes home from a party with glittery nails, Casey wants glittery nails too. And when Abuelita visits wearing an armful of sparkly bracelets, Casey gets one to wear, just like Jessie. The adults in Casey's life embrace his interests, but Jessie isn't so sure. Boys aren't supposed to wear sparkly, shimmery, glittery things. Then, when older boys at the library tease Casey for wearing -girl- things, Jessie realizes that Casey has the right to be himself and wear whatever he wants. Why can't both she and Casey love all things shimmery, glittery, and sparkly? Here is a sweet, heartwarming story about acceptance, respect, and the freedom to be yourself in a world where any gender expression should be celebrated. Sparkly things are for everyone to enjoy!