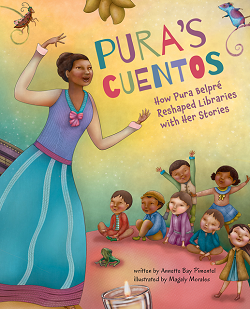 Pura’s Cuentos: How Pura Belpré Reshaped Libraries with Her Stories is itself a story of la gente, a cuento for and belonging to all children. In this book, children are taken on Pura Belpré’s journey of how she came to be a transformational figure in the library system by pioneering bilingual storytelling and making library services accessible to the Latinx community. When Belpré moves to Harlem in 1921 and is hired as a librarian, she realizes that the enchanting stories her abuela told her as a child in Puerto Rico are missing from library shelves. Driven by the knowledge that “Not all the stories worth telling are in books,” (p. 10) Belpré decides to break the library rule that she must only read from books to children at storytime and instead performs her abuela’s cuento of how Pérez the mouse asks Martina the cockroach to marry him. Belpré also realizes that the Spanish-speaking neighborhood children are missing from the library and brings them in to listen to cuentos en inglés y en español and to fill their arms with books.

Pura’s Cuentos highlights the tradition of oral storytelling, the importance of the passage and preservation of cultural narratives to audiences from all racial and ethnic backgrounds, the creation of cultural bridges, and the influence of bi/multilingualism. Author Annette Bay Pimental and illustrator Magaly Morales extend visibility to characters with different social identities and lifestyles, showing that there is something to gain for every child who reads this book. The narrative is a counter-story by nature, children witness Belpré challenging the dominant ideology in storytelling to be an agent of change in fostering inclusive spaces.

The front cover begins the narrative’s creation of a cultural bridge that breaks through spatio-temporal barriers. Children are mesmerized by Belpré’s oral storytelling in the New York library illuminated by candlelight, while also being transported to Puerto Rico through Belpré’s cuentos, shown by symbols such as the coquí, mangos, Pérez and Martina. The opening two-page spread shows young Belpré listening to her abuela’s cuentos as they make food together around a table that looks like a globe. This illustration shows that although her abuela’s cuentos are introduced to Belpré on the island, they are universal, foreshadowing how Belpré will bring the island to New York City through the cuentos passed on to her. 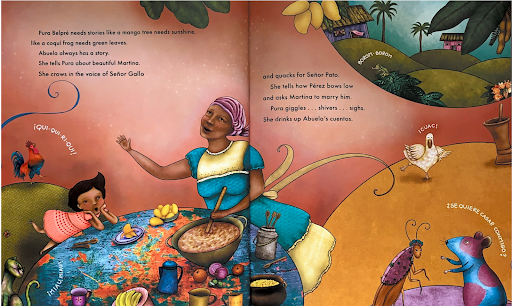 The colorful, pastel illustrations are reminiscent of the island and to the color scheme in Belpré’s Pérez y Martina shown below. 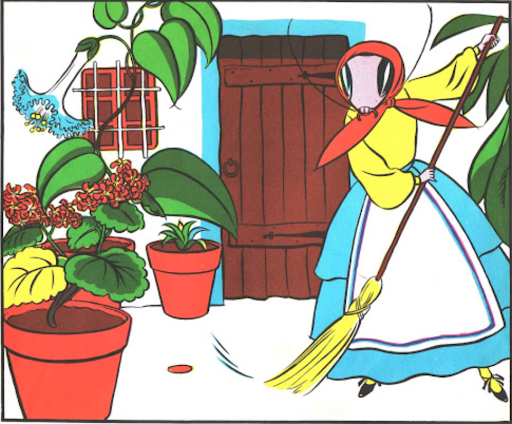 Illustrations of New York City feel authentic, as well. When Belpré moves to Harlem, children feel the longing of home, but also the excitement of a new adventure in a foreign place. 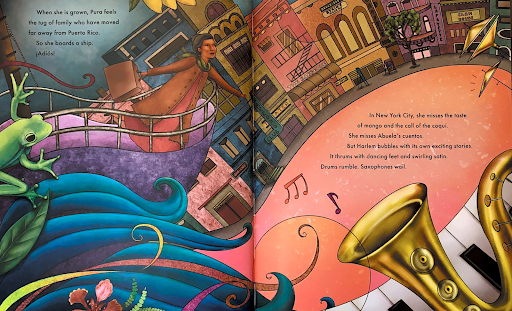 Belpré marvels at the music in the streets and chats with other Spanish-speakers in the neighborhood, but when she enters the 135th Street Branch New York Public Library, she neither sees faces that look like hers nor books that tell abuela’s cuentos. This is a problem for Belpré.

When Belpré is hired as a librarian and told the rules about storytime: “Light the candle. Open the book. Tell the story” (p. 9), she does not follow them. Belpré instead brings storytelling to life with Pérez and Martina’s tale of romance, expanding both the kinds of stories being told, moving beyond the dominant king and queen trope, and the methods of doing so, which she is praised for by the children and her bosses. Children see that breaking rules to be active agents for positive social change is acceptable.

As Pura brings Spanish-speaking neighborhood children to the library and begins holding bilingual storytime, she creates a space where all are welcome and all could learn. The bilingual inclusions in the illustrations feature a girl telling her mother, “Nos contó historias de Puerto Rico!” and one child pointing to Belpré telling a friend, “Ella habla español!” (p. 20). The children visibly feel seen and heard as Belpré tells the cuentos of the community. 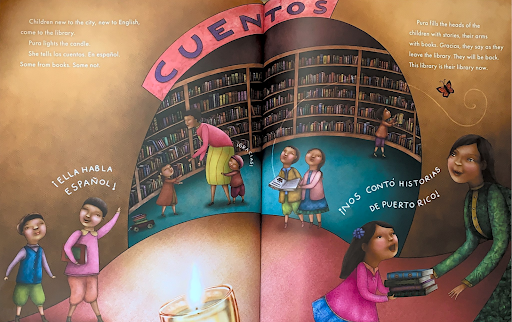 While Belpré knew that stories didn’t have to be on the written page to be valuable, she eventually published her story, abuela’s story, the children’s story, as one for the people. In 1932 Pérez y Martina was the first book published in the United States by a Puerto Rican author. Children learn that working against the status quo is worth the challenge. In Belpre’s case, she brought marginalized voices to the forefront and made sure Latinx children were being acknowledged and validated.

It’s also worthwhile to note that the folktale of Pérez and Martina within this book is about two completely different creatures who fall in love, emphasizing that difference need not equate to division.

A book that I recommend on the impact of library services to the Latinx immigrant/ migrant community is Dreamers by Yuyi Morales.

“The Pura Belpré Medal: the Latino/a Child in America, the “Need” for Diversity, and Name-branding Latinidad,” in Prizing Children’s Literature: The Cultural Politics of Children’s Book Awards (2017), by Marilisa Jiménez García, Routledge. Recommended reading on the memorialization of Pura Belpré and the success of the Belpré medal in the field of children’s literature.

Publisher's Synopsis: A lyrical, vibrant tribute to the amazing life and legacy of Pura Belpré, a lauded storyteller, librarian, and pioneer of bilingual storytimes.

Pura’s abuela always has a cuento to share. She crows ¡Qui-qui-ri-quí! for Señor Gallo, booms Borom, Borom for Señor Zapo, and tells of a beautiful cockroach who loves a mouse. Pura clings to these stories like coquíes cling to green leaves.

When Pura grows up and moves from Puerto Rico to Harlem, she gets a job at the library, where she is surrounded by stories — but they’re only in English. Where is Señor Gallo? Where is Pérez the mouse? Where is Puerto Rico on these shelves? She decides to tell children the tales of her homeland in English and in Spanish.
Lyrically written, with lively illustrations, Pura’s Cuentos captures the exuberant spirit and passion of Pura Belpré: celebrated storyteller, author, folklorist, and the first Latina librarian in New York City. A pioneer of bilingual storytimes, she welcomed countless new families to the library, formed cultural bridges in her community, and broke the rules by telling stories that weren’t printed in books — at least, not yet.