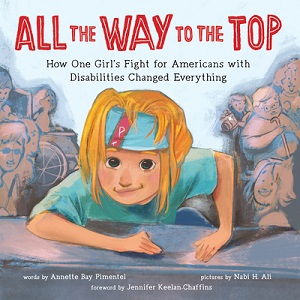 All the Way to the Top attempts to fill a need in children’s literature, but it disappoints in a couple of areas. Based on the real life of Jennifer Keelan-Chafins, the picture book shows how she became media famous in the movement for disability rights. It concludes with the Capitol Crawl, one the most influential protests of the movement. Shining a light on this moment in time is a needed subject for kid’s lit; hopefully, there are more books to follow.

If we examine a couple of trends in children’s publishing, this new book hits on a bad one and misses on a good one.

Let’s start with the bad trend. Children’s book authors (presumably publishers, too) have a tendency to glorify the lone crusader while ignoring movements with years (sometimes decades) of work and action. All the Way to the Top does this right on the cover in the subtitle of the book — “How ONE girl’s fight…changed everything” (emphasis mine). It tells us from the beginning that we are here to pay tribute to this hero. The cover image shows a young blond girl in full color, while the rest of people in the fight are blurry background images with no color.  The protagonist, Jennifer Keelan-Chaffins, spends time in the rest of the book attending organizing meetings and going to protests, but there is no mention of the organizations’ names or even the names of any other individuals. Odd right? Why aren’t the book’s creators interested in telling kids about this movement and the people involved? (There is one brief mention of ADAPT in the after notes). There are many, many examples of this in children’s literature. A recent example is the book on Greta Thunberg that we tweeted about below:

And so they begin, picture books about Greta Thunberg that erase all history of climate justice activism. “Greta’s protest, all alone, sparked a worldwide children’s march.” Will there be any children’s books that correctly place Greta in context of longtime, int’l movement? pic.twitter.com/Wkj0KVY8TI

The second trend that has been gaining traction in kids lit for a few years now is #ownvoices. We couldn’t be happier about this trend. Authors from under-represented groups are creating significant content that includes characters from the under-represented audience and kids see themselves in the pages of books. It would have been better that a book about the passage of the ADA (Americans with Disabilities Act) be written by a disabled writer. The subject of the book, Jennifer Keelan-Chaffins, wrote the forward for the book, but the author does not have the lived experiences of disabled people making their way in an ableist world. Kudos to the author for trying, but an #ownvoices author would have meant much to readers.

Despite missing the latter trend, this book addresses a topic that is virtually non-existent in children’s literature — the movement that led to the ADA and its passage. If there are other books out there, we would like to hear about them. In the contemporary U.S., ramps, curb cuts, and electronic doors are common, but not long ago, they rarely existed. Young people (in the U.S.) don’t know a world without these attempts to make the world more accessible for all of our citizens. A book, this book in particular, is a welcome attempt to bring the history of disability rights to light and emphasize the need for these struggles.

While the ADA was a great piece of legislation that brought along myriad changes that help our disabled citizenry, it was not a panacea. Numerous buildings are still not accessible with no plans to update them with ramps and electronic doors. Most events lack sign language interpreters to make events accessible to people with hearing loss. Public viewing screens lack subtitles, public transportation is often inaccessible due to broken equipment (D.C.’s broken elevators and escalators, for example), or people are left waiting for hours for the accessible transportation to arrive (Uber and Lyft, equally guilty). Upon hearing these complaints from disabled people, the refrain from abled people is “but the ADA!” Passage of the ADA was momentous, but enforcement is slow and spotty, if it happens at all. The systems that are in place for enforcement could use a 21st century upgrade. The reality is that disabled people are forced to adapt to an ableist society, but most of society is not willing to make reasonable accommodations to ensure quality of life for all citizens, especially for those with disabilities. This disclaimer about the ADA is only to illustrate the deficiencies at the end of All the Way to the Top. The book indicates that there is still work to be done, but the hopeful tone at the end of the book doesn’t truthfully represent the lives of many disabled people who want nothing more than to live independently without existing structures making it harder instead of easier.

Ultimately, All the Way to the Top is recommended at this time because of the overall scarcity of books about the passage of the ADA. However, we encourage parents and teachers to explain that Keelan-Chafins is part of a long line of disability activists and name some of the people and organizations involved.

***A note about language:  I have chosen to not use “people first” language. Anecdotally, PFL language seems more important to allies than it does to actual disabled people, including me.

Publisher's Synopsis: This is the story of a little girl who just wanted to go, even when others tried to stop her.

Jennifer Keelan was determined to make a change--even if she was just a kid. She never thought her wheelchair could slow her down, but the way the world around her was built made it hard to do even simple things. Like going to school, or eating lunch in the cafeteria.

Jennifer knew that everyone deserves a voice! Then the Americans with Disabilities Act, a law that would make public spaces much more accessible to people with disabilities, was proposed to Congress. And to make sure it passed, Jennifer went to the steps of the Capitol building in Washington DC to convince them.
And, without her wheelchair, she climbed.

ALL THE WAY TO THE TOP!