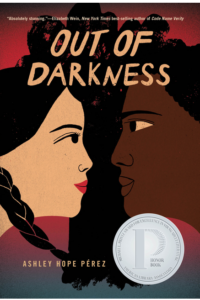 On March 18, 1937, a natural gas leak led to a deadly explosion and collapse of the all-white school in New London, a town in East Texas. Ashley Hope Pérez, who grew up nearby, mined her grandmother’s recollections, archives, and historical narratives to build a complex and memorable novel around this event, a novel that at its core explores love across hard racial lines.

Ultimately, this powerful novel asks: What are we willing to sacrifice for friendship and love? For defying an unjust society? For working to bring about racial justice? Out of the Darkness is highly recommended. Continue reading.

Out of Darkness by Ashley Hope Pérez
Published by Lerner Publishing Group on 2015
Pages: 402
ISBN: 9781467742023
Review Source: De Colores: The Raza Experience in Books for Children
Buy at Powell's Books
Also by this author: The Knife and the Butterfly

SYNOPSIS: "This is East Texas, and there's lines. Lines you cross, lines you don't cross. That clear?" New London, Texas. 1937. Naomi Vargas and Wash Fuller know about the lines in East Texas as well as anyone. They know the signs that mark them. They know the people who enforce them. But sometimes the attraction between two people is so powerful it breaks through even the most entrenched color lines. And the consequences can be explosive.Ashley Hope Pérez takes the facts of the 1937 New London school explosion--the worst school disaster in American history--as a backdrop for a riveting novel about segregation, love, family, and the forces that destroy people.