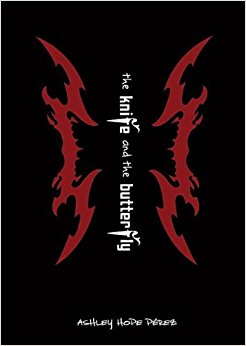 Last October I spoke on a panel with four other authors, including fellow Pirate Tree-huggers J.L. Powers and Nancy Bo Flood, on the topic of children’s literature and war. My part on children as combatants included G. Neri and Randy DuBurke’s graphic novel Yummy: The Last Days of a Southside Shorty about an 11-year-old Chicago boy executed by gang members after he shot a 14-year-old neighbor to prove himself to the gang.

This theme of gang warfare and the trauma experienced by young combatants in inner cities in the United States appears again in Ashley Hope Perez’s second young adult novel, The Knife and the Butterfly, published this month by Carolrhoda Lab. Continue reading.

Publisher's Synopsis: After a marijuana-addled brawl with a rival gang, 16-year-old Azael wakes up to find himself surrounded by a familiar set of concrete walls and a locked door. Juvie again, he thinks. But he can't really remember what happened or how he got picked up. He knows his MS13 boys faced off with some punks from Crazy Crew. There were bats, bricks, chains. A knife. But he can't remember anything between that moment and when he woke behind bars.

Azael knows prison, and something isn't right about this lockup. No phone call. No lawyer. No news about his brother or his homies. The only thing they make him do is watch some white girl in some cell. Watch her and try to remember.

Lexi Allen would love to forget the brawl, would love for it to disappear back into the Xanax fog it came from. And her mother and her lawyer hope she chooses not to remember too much about the brawl?at least when it's time to testify.

Lexi knows there's more at stake in her trial than her life alone, though. She's connected to him, and he needs the truth. The knife cut, but somehow it also connected.