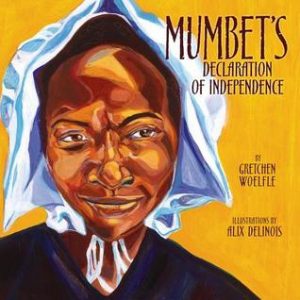 Mumbet’s Declaration of Independence gives young readers a slavery-to-freedom narrative that is clever, honest, and age appropriate. Gretchen Woelfle’s recounting of Elizabeth Freeman’s true story of resistance and liberation is smartly written and beautifully illustrated. Readers are introduced to Mumbet, a Black woman enslaved in Massachusetts at the time of the Declaration of Independence in 1776.

Mumbet, knowing that the promise of freedom and equality should belong to her as well, successfully brings a lawsuit against her owners to be free and chooses the name Elizabeth Freeman. Kids will root for this intelligent, brave heroine who confronted the terrible nature of slavery in the United States and set the precedent for Blacks to be free in Massachusetts. Read more.

The Fight for Justice: Mumbet’s Declaration of Independence and the United States Constitution 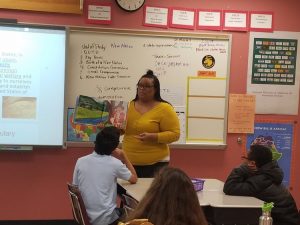 As part of the Black Lives Matter at School Week of Action, Dr. Tiffany Mitchell Patterson read Mumbet’s Declaration of Independence to her students at Kenmore MS as an introduction to a lesson on the Constitution.  Following the read aloud, Dr. Mitchell had the students analyze the Preamble to the U.S. Constitution. She had students stop and reflect on the words “we the people” by asking students, “Who weren’t they talking about here?” Several students responded, “enslaved blacks” and “women.” One student responded, “I think they were talking about white men.” Read more. 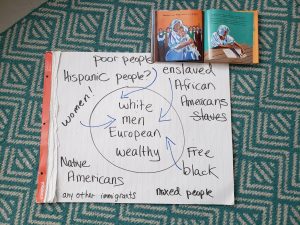 On the last day of 2020’s Black Lives Matter at School Week of Action, Watkins ES teacher Monique Sullivan gathered her 4th grade students for a history lesson using Mumbet’s Declaration of Independence to explore how mainstream historians have excluded large groups and important perspectives that challenge mainstream interpretations of the past. At the end of the lesson, students described how how Mumbet’s story shows the hypocrisy of historical figures like the creators of the U.S. Constitution and signers of the Declaration. The students also thought it was important to get a more complete view of history that focuses not only on the rich and powerful. Read more.

Publisher's synopsis: "All men are born free and equal." Everybody knows about the Founding Fathers and the Declaration of Independence in 1776. But the founders weren't the only ones who believed that everyone had a right to freedom. Mumbet, a Massachusetts slave, believed it too. She longed to be free, but how? Would anyone help her in her fight for freedom? Could she win against her owner, the richest man in town?
Mumbet was determined to try.
Mumbet's Declaration of Independence tells her story for the first time in a picture book biography, and her brave actions set a milestone on the road toward ending slavery in the United States.