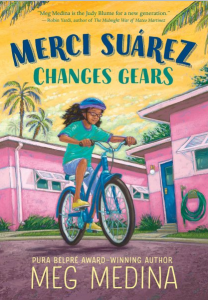 It’s the beginning of Mercedes (Merci) Suarez’s sixth grade year, and right away she notices big changes. There’s a new boy in class, just moved to South Florida from Minnesota, and Merci has been assigned to be his Welcome Buddy, but wealthy, popular classmate Edna Santos has set her sights on him. Merci’s older brother Roli has his driver’s license and will soon be leaving for college. Most ominous of all, though, are the changes in Merci’s beloved grandfather, Lolo, who forgets more and more, and now has begun to act strangely—fighting with loved ones and wandering off into traffic. All the older people in Merci’s extended family—all of whom live in three small adjacent houses they call Las Casitas—seem to know what’s going on but won’t tell her.

In this eventful year, Merci encounters bullying, feeling out of place because her private-school classmates can buy things her lower middle class family cannot, family responsibilities that keep her from trying out for sports teams (despite her athletic ability), and facing Lolo’s decline. More than anything else, Merci wants a new bicycle, but all her efforts to make money (or win a contest with a cash prize) end in failure. Nonetheless, the family that takes away is also the family that gives her more than she can imagine as they come together to understand and address a sad situation with no solution. In this novel for middle grade readers, veteran author Medina portrays a close-knit Cuban American family and the diversity of South Florida’s Cuban American community. Her use of humor leavens the serious subject matter while foreshadowing perils to come. For instance, in describing Roli’s attempts to drive, she writes,

Roli has only had his license for a few weeks and already we’ve lost a mailbox and two recycling bins to his skills behind the wheel. Even our cat, Tuerto, has learned to hide when he hears the jingle of car keys. Continue reading.

Publisher's Synopsis: Thoughtful, strong-willed sixth-grader Merci Suarez navigates difficult changes with friends, family, and everyone in between in a resonant new novel from Meg Medina.

Merci Suarez knew that sixth grade would be different, but she had no idea just how different. For starters, Merci has never been like the other kids at her private school in Florida, because she and her older brother, Roli, are scholarship students. They don’t have a big house or a fancy boat, and they have to do extra community service to make up for their free tuition. So when bossy Edna Santos sets her sights on the new boy who happens to be Merci’s school-assigned Sunshine Buddy, Merci becomes the target of Edna’s jealousy. Things aren't going well at home, either: Merci’s grandfather and most trusted ally, Lolo, has been acting strangely lately — forgetting important things, falling from his bike, and getting angry over nothing. No one in her family will tell Merci what's going on, so she’s left to her own worries, while also feeling all on her own at school. In a coming-of-age tale full of humor and wisdom, award-winning author Meg Medina gets to the heart of the confusion and constant change that defines middle school — and the steadfast connection that defines family.