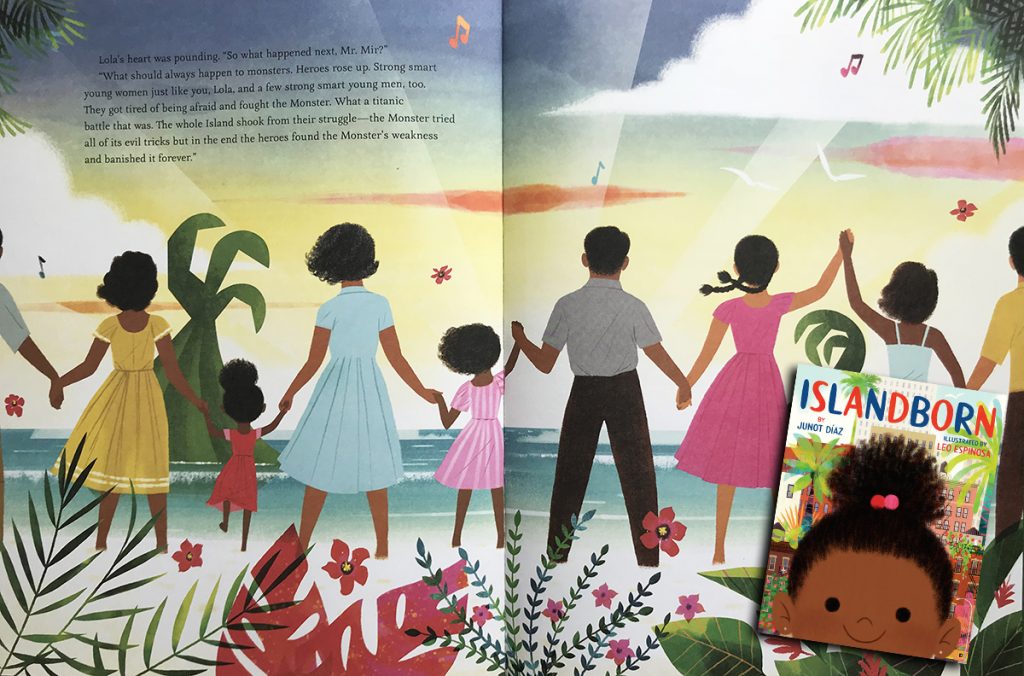 The new children’s book Islandborn by Junot Díaz tells the story of a young girl, Lola, who learns from family and friends about the island where she was born. The island is not named in the book, but readers can deduce that the story is based on the history of the Dominican Republic.

“Every kid in Lola’s school was from somewhere else,” the book opens. “Hers was the school of faraway places.” Lola was brought to the United States as a baby, therefore she has no memories from the island. When her teacher asks the class to draw a picture of “the country you were originally from, your first country,” Lola asks family and friends in the neighborhood what they remember most about the country where she was born. The stories paint a picture of life on the island and the forces that led her family to leave such a wonderful place. Leo Espinosa’s illustrations of people beautifully affirm a range of skin colors and Afro-Latinx identity. This diversity and genuine representation are rare in children’s books.

There is so much to love about this book. The writing is lyrical with a child reader in mind. Just how hot is the island? “The heat is on you like five bullies.” How shy is Lola in class? “She hated raising her hand almost as much as she hated Nelson’s yelling.”

Most important of all, Islandborn is the only one of dozens of new books on immigration that explains in an age-appropriate way why people are forced to leave their home countries. When Lola hears so many wonderful stories about the island, she asks the obvious question, “Then why did they come to the U.S.?” Finally, the building superintendent explains to her that “A monster fell upon our poor Island. . . It could destroy an entire town with a single word and made a whole family disappear simply by looking at it.” By describing the dictator Trujillo as a monster, Díaz introduces a brutal and essential political history; a history that upends the deficit narrative around immigration and highlights the push factors. He opens the door for conversation with children about the complex reasons for immigration. All too often, this essential part of the story is reserved for the author’s note on the end pages. Islandborn is a Harvest of Empire for young children.

We are proud of the role of Teaching for Change played to make this excellent book even better. When an advance copy arrived at our office in January, we were dismayed to see that that the monster was illustrated as a black bat in an ominous sky. One more time, the message was that black is bad and scary. We quickly consulted with our colleagues in the See What We See network who all agreed the illustration was problematic.

Teaching for Change contacted Díaz and the publisher, Dial Books for Young Readers (a division of Penguin Books) with our concerns that the affirmation of racial identity in the beautiful illustrations throughout the book would get undone by the “black is bad” monster. Especially in contrast to the other “good” bats throughout the rest of the book that are drawn in a myriad of other colors.

We were delighted that Dial Books took the major step, just one month away from the book’s release, of revising the illustrations of the monster throughout the book. We were told this involved destroying tens of thousands of books already in print and issuing a new printing in English and Spanish.

The new version of the book portrays the monster as green rather than black. 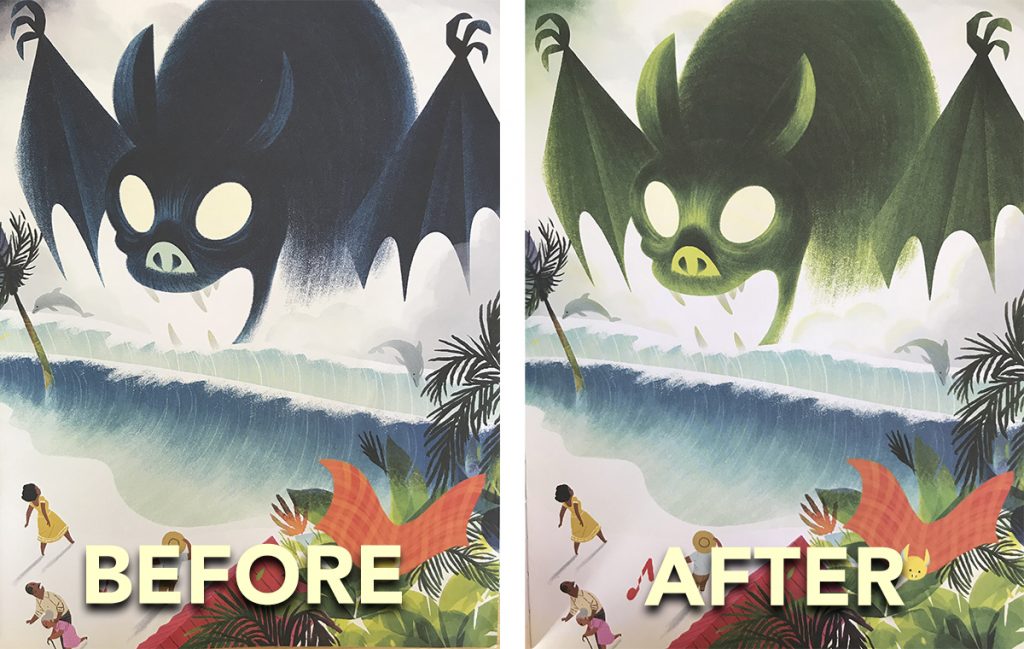 While it is a dramatic improvement, we hope that children’s book illustrators consider making monsters in even lighter colors. (This would be a good student assignment for art classes–convey to the viewer that an orange or pink monster is scary.)

In addition to describing the monster, the building superintendent also describes the people’s resistance. “Heroes rose up. Strong smart women just like you, Lola, and a few strong smart young men, too.” Díaz is likely referring to the Mirabal sisters and many others who fought for an end to the U.S.-backed dictatorship in the Dominican Republic.

One place where young readers could handle a more accurate narrative is in the description of what happened to those heroes. Lola was told, “No one knows really [what happened to them.] It was so long ago.” The truth is that we actually do know what happened to the Mirabal sisters and countless others who challenged the Trujillo dictatorship. A response that children could handle would be “Sadly, many were killed, but others survived. Their children, like you, continue to work for a better world today.”

While all the references throughout the book indicate that the Dominican Republic is the island, it is never named. Díaz has explained in public events that he intentionally left the island unnamed so that the reader could bring their imagination to the story. He adds that there are monsters in many countries and there are many kinds of monsters (not all are dictators); he wanted this story to be about more than one place or experience.

However, all too often places and people are generalized in children’s literature, particularly with respect to people of color. Children’s books reference “Africa” rather than naming a country or reference “Native Americans” rather than naming an American Indian nation. While we appreciate Díaz’s rationale, we think it would be better to name the place and in an afterword note that there countless related stories in countries around the world, particularly where the U.S. has intervened.

Overall, this is one of the best and most important children’s books to have been published in quite some time. We hope it sets a new standard for illustrations of skin color, for poetic writing, and for addressing a relevant topic in a sophisticated yet child-friendly way. We look forward to the forthcoming sequel. 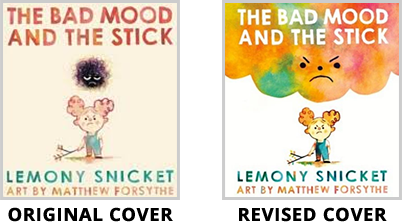 A similar concern was raised in 2017 about The Bad Mood and the Stick. Librarian Edith Campbell published a blog called “I Am Not Your Bad Mood.” The publisher changed the image before the official release of the book.

A critique of My Beautiful Birds led to a response from the publisher, but no change to the representation of blackness as something evil to escape.