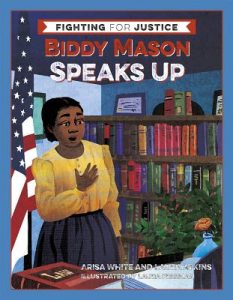 In 1866, Biddy Mason bought a parcel of land on the outskirts of Los Angeles. The purchase provided a legacy for her family and helped Mason become one of the wealthiest people in Los Angeles. She was 48 years old, a midwife and herbalist; a single mother; a formerly enslaved person and a survivor of rape. Mason helped shape the Black community in Los Angeles through philanthropy and community organization. Her story, like so many millions of untold stories, fills a gaping hole in how the American historical narrative is transmitted to young people.

Through a smorgasbord of documentation, White and Atkins demonstrate the depth of evidence needed to fully understand the impact of slavery and racism both in a historical context and in modern day society. Painful and violent concepts like enslavement, profiteering, and rape are respectfully approached with age-appropriate clarity, which will prompt meaningful discussion.

Chapter three provides an honest look at slavery and genealogy, a topic integral to Mason’s story. The inset explains that slavery was matrilineal, meaning that if a mother was enslaved, her child was enslaved. “Enslaved women could sometimes partner and have children with enslaved men. Masters could also rape enslaved women. Enslaved people did not have a choice about how their bodies were used, since they were seen as property” (p. 21). A supplemental text box defines rape as “When one person forces a sexual act on another person who does not want it or who is unable to give consent” (p. 21). Direct explanations like these encourage questions and link the atrocities of the past with current campaigns for equality and justice. The Fighting for Justice books explain to children why things aren’t fair. They also uplift and empower, proving through their protagonists that ordinary people can speak up.

Among many defining attributes, the Fighting for Justice series (Fred Korematsu Speaks Up, 2017) forges a connection between history and present day society. Biddy Mason Speaks Up invites readers to confront White supremacy, and to explore equality and injustice together in a meaningful way. A supplemental section titled “Healing Your Community: From Biddy’s Day to Ours” explores modern day activists and organizations including Black Lives Matter. Here, an inset introduces the work of modern-day abolitionist Regina Evans and describes the prevalent but not widely recognized practice of human trafficking. This reference demolishes the idea that slavery is neatly contained in a single ugly chapter of American history. Continue reading.

Also read “Freedom Is a Steady Action” by Arisa White, co-author of Biddy Mason Speaks Up, on the time-endured lessons we can learn from Mason’s life.

Publisher's Synopsis: Building on the brilliance of Fred Korematsu Speaks Up, the newest installment in the Fighting for Justice series introduces young readers to another real-life champion for civil rights: Bridget "Biddy" Mason, an African American philanthropist, healer, and midwife who was born into slavery. When Biddy arrived in California, where slavery was technically illegal, she was kept captive by her owners and forced to work without pay. But when Biddy learned that she was going to be taken to a slave state, she launched a plan to win her freedom. She refused to be defined by her enslavement, and coauthors Arisa White and Laura Atkins devote much of their narrative to Biddy Mason's later life as a business and civic leader in the fledgling city of Los Angeles. Biddy Mason Speaks Up is an age-appropriate yet unflinching examination of slavery, racism, and community healing in the United States. Each chapter begins with lyrical verse and full-color illustrations that draw readers into the narrative, and is followed by visually engaging sections filled with keyword definitions, historical context, timelines, and primary sources. Throughout the book, the authors pose questions to the reader, such as "How do you see power at work in your community?", making Biddy Mason's story all the more relatable to the present day.