VICTORY – Scholastic’s celebratory children’s books about Donald Trump are finally OUT OF PRINT.
After thousands of letters in an action campaign from teachers, parents, and students across the U.S., Scholastic has stopped reprinting these two books.

On June 16, 2018, Scholastic issued a statement, but they did not respond to any of the points in the review below. Read more in our post, Despite National Outrage, Scholastic Defends Children’s Books Celebrating Trump. Also, read our review for President Donald Trump, written for grades 1 – 2. 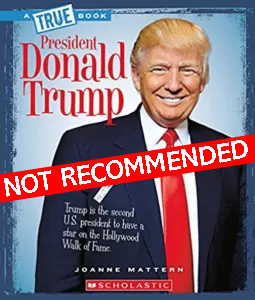 Reviewed by Kathleen Nganga and Teaching for Change Staff

Scholastic’s A True Book: President Donald Trump by Joanne Mattern (2017) for grades 3-5 is more detailed than the grade 1-2 President Donald Trump. However, while the book claims to be “a true book” and even opens with the line “Everything you are about to read is true,” it still is far from an accurate portrayal of Donald Trump’s life.

The book dedicates 10 glowing pages to Trump’s business career, high rises, and casinos, but does not include a single detail about housing discrimination claims, his unfulfilled business contracts, and customer grievances such as the lawsuits against Trump University. In fact, the one time the book mentions Trump’s bankruptcies and alludes to organizational troubles, the book removes all responsibility from Trump by solely attributing these problems to the “weakened” real estate market.

There is a page dedicated to New York City’s Central Park where Trump is credited with rebuilding the Wollman ice-skating rink in 1986. No mention is made of another Central Park story, Trump’s crusade against the Central Park Five (teenagers at the time who were later exonerated), including spending $85,000 for full page ads in all four New York daily newspapers in 1989 calling for a reinstatement of the death penalty. This is a crucial story for understanding Trump’s use of racism and law and order rhetoric to garner support.

There is also no mention of Trump’s lead role in the Birther Movement (questioning President Obama’s legitimacy as an American citizen). Both of these stories are relevant to his biography since they contributed to his base and eventual election as president. By dedicating most of the book to Trump’s fancy buildings and T.V. shows, the implication is that his business experience and stardom led to his election. While there are a couple of references to prejudice and discrimination, racism is not mentioned once.

Regarding the election, Mattern writes: “[Trump] had no political experience. He had never held a public office or taken part in political activities. For this reason, some people thought he was not qualified to be president. Others loved the idea of an outsider coming in to shake up the way the government was run.” In contrast, after detailing Hillary Clinton’s professional experiences the author states, “… many people did not like Clinton. They felt she was not trustworthy and would not bring enough changes to the government.” While the book qualifies that “some people” were dissatisfied with Trump, dissatisfaction with Clinton is qualified with “many people.” This juxtaposition suggests that most people found Trump qualified and trustworthy. This narrative is reaffirmed through an earlier reference to Trump’s behaviors. In large font is the statement: “Trump has never smoked, drunk alcohol, or taken drugs.” How would we know? And even if true, why is it highlighted?

There is only one page dedicated to Trump’s campaign statements. It begins, “Trump made several statements during his campaign that were concerning to some people.” That is an understatement. People were not only concerned, they were also demeaned, insulted, and threatened by these comments. It says, “For example, he promised to build a wall between the United States and Mexico to keep out illegal immigrants.” There is no reference to the language he used to describe women, Mexican immigrants, POWs, Muslims, people with disabilities, and more.

While A True Book: President Donald Trump, does acknowledge that the election “divided the country” and that Trump made several statements that “were concerning to some people,” it omits vital information that is essential to give young readers a true account of Trump’s life and presidency.

Kathleen Nganga was an intern with Teaching for Change in the summer of 2018 as part of her Truman Fellowship.

Take Action: This is not the first time that Scholastic been called to account for misleading children. In 2017, readers asked why the Scholastic News stories about the devastation of Houston by Hurricane Harvey made no reference to climate change. In 2016, a protest of A Birthday Cake for George Washington led to the book’s recall. In 2011, Rethinking Schools exposed a partnership between the American Coal Federation and Scholastic to distribute educational materials that described the benefits of coal without any reference to the dangers. It’s time to say Step Up Scholastic. Write or call to demand accuracy in non-fiction books for children. Let us know what action(s) you take with respect to Scholastic’s President Donald Trump.

PUBLISHER'S DESCRIPTION: Take a close look at the lives of remarkable people with this fascinating A True Book subset. From U.S. presidents to legendary athletes, the subjects of these books are sure to inspire and enlighten young readers.