VICTORY – Scholastic’s celebratory children’s books about Donald Trump are finally OUT OF PRINT.
After thousands of letters in an action campaign from teachers, parents, and students across the U.S., Scholastic has stopped reprinting these two books. 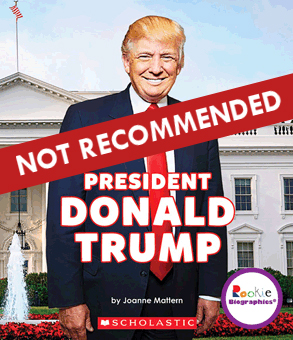 “His buildings reached toward the sky.
His businesses just grew and grew.
Then Trump became our president–
People wanted something new.”

President Donald Trump by Joanne Mattern (2017) claims to offer young readers an informative, accurate, and unbiased narrative about the 45th U.S. president; however, as the poem above illustrates, it falls far short of that mark.

This failing comes despite the author’s and the publisher’s stated intention to produce a balanced narrative. In an interview with The New York Times on the challenges of writing on Trump for young readers, Mattern said, “for a children’s audience, the mandate is to provide unbiased facts with a dusting of the context required to maintain accuracy.” Joana Costa Knufinke, a nonfiction editor at Scholastic, is quoted saying “We make an effort to show both points of view.” Continue reading.

PUBLISHER'S DESCRIPTION: Rookie Biographies offer an in-depth look at some of the most influential and interesting people in history. They might be innovative artists, like Maurice Sendak, or groundbreaking athletes like Muhammad Ali. Maybe they are ordinary people who do extraordinary things, like Alexander Hamilton. No matter what his or her story, the inviting text and exciting photos of these beginning biographies make exploring these fascinating people approachable and fun.