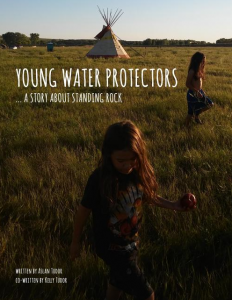 Aslan and Kelly Tudor’s Young Water Protectors: A Story About Standing Rock is a non-fiction photo-essay published by EagleSpeaker Publishing.

The “about” page tells us that the author, Aslan Tudor, was eight and nine years old during the period depicted in the book, and a citizen of the Lipan Apache Tribe of Texas. Information provided is his first-hand account of time spent at the camps when he was there in 2016.

Told from the point of view of a child, Young Water Protectors is a rare kind of story of a unique period of activism with Native people from so many nations standing together to fight a company exploiting people and hurting earth’s resources.  Continue reading.

Publisher's Synopsis: At the not-so-tender age of 8, Aslan arrived in North Dakota to help stop a pipeline. A few months later he returned - and saw the whole world watching.

Read about his inspiring experiences in the Oceti Sakowin Camp at Standing Rock. Learn about what exactly happened there, and why. Be inspired by Aslan's story of the daily life of Standing Rock's young water protectors. Mni Wiconi ... Water is Life.