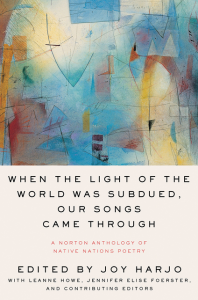 The first three lines in Rendon’s poem, “What’s an Indian Woman to Do?” are these:

what’s an indian woman to do
when the white girls act more indian
than the indian women do?

From there we read about the Indian woman’s ex-husband and what he expected her to do. The poem doesn’t tell us this explicitly, but to me, that expectation is based on stereotypes he had acquired. We read about the Indian woman’s mother and her work and how their life meant they didn’t have time to make the sorts of things that white girls make and sell at powwows — and how they use what they think is a Native-sounding name and start using a reservation accent . . . . And that bit about them correcting the Indian woman’s use of Native language . . . . What they are doing is claiming a Native identity.

In the introduction to When the Light of the World Was Subdued, Our Songs Came Through, Joy Harjo writes (p. 15):

“Poems like Marcie Rendon’s playful ‘What’s an Indian Woman to Do?’ both worry the edges of mixed identity and strongly claim Indigenous belonging.”

Rendon’s poem is about white women claiming to be Native, how they treat Native women, how they are embraced by others, and what that all feels like to a Native woman. If you follow Native people on social media, you likely know that we talk about sketchy claims to Native identity. From time to time, the national news will cover someone that has made a false claim to an identity. Most recently there were many articles about Jessica Krug, a white woman who claimed to be Black. Continue reading.

Publisher's Synopsis: Selected as one of Oprah Winfrey's "Books That Help Me Through"

This landmark anthology celebrates the indigenous peoples of North America, the first poets of this country, whose literary traditions stretch back centuries. Opening with a blessing from Pulitzer Prize–winner N. Scott Momaday, the book contains powerful introductions from contributing editors who represent the five geographically organized sections. Each section begins with a poem from traditional oral literatures and closes with emerging poets, ranging from Eleazar, a seventeenth-century Native student at Harvard, to Jake Skeets, a young Diné poet born in 1991, and including renowned writers such as Luci Tapahanso, Natalie Diaz, Layli Long Soldier, and Ray Young Bear. When the Light of the World Was Subdued, Our Songs Came Through offers the extraordinary sweep of Native literature, without which no study of American poetry is complete.