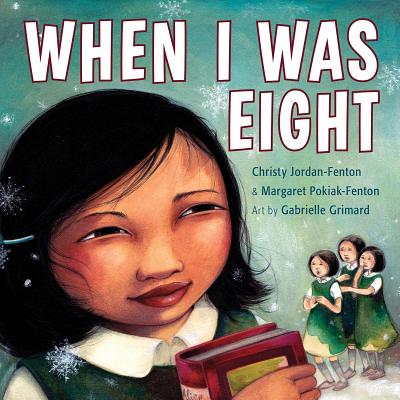 The most powerful stories are those that pull you in such that you feel the emotions of the character(s) in the story and when you come to the end, you let loose a big sigh. When I Was Eight did that to me when I read it a few days ago.

Published in 2013 by Annick Press, the authors of When I Was Eight are Christy Jordan-Fenton and Margaret Pokiak-Fenton. The story told in When I Was Eight is one from Margaret’s childhood. Margaret is Inuit. Christy is her daughter-in-law. Continue reading.

Publisher's Synopsis: Nothing will stop a strong-minded young Inuit girl from learning how to read.

Olemaun is eight and knows a lot of things. But she does not know how to read. She must travel to the outsiders' school to learn, ignoring her father's warning of what will happen there.

The nuns at the school take her Inuit name and call her Margaret. They cut off her long hair and force her to do chores. She has only one thing left -- a book about a girl named Alice, who falls down a rabbit hole.

Margaret's tenacious character draws the attention of a black-cloaked nun who tries to break her spirit at every turn. But she is more determined than ever to read.

By the end, Margaret knows that, like Alice, she has traveled to a faraway land and stood against a tyrant, proving herself to be brave and clever.

Based on the true story of Margaret Pokiak-Fenton, and complemented by stunning illustrations, When I Was Eight makes the bestselling Fatty Legs accessible to young children. Now they, too, can meet this remarkable girl who reminds us what power we hold when we can read.