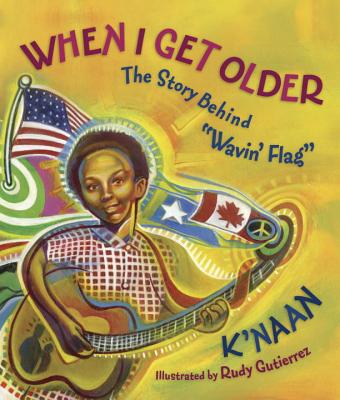 Since it became the theme song of the Soccer World Cup in 2010, many young people all over the world have come to know and love the “Wavin’ Flag” song of Canadian-Somali Hip Hop singer K’naan (born Keynaan Abdi Warsame). This creative and impressive book for children aged six and up tells the story behind that song.

In relatively few words and with superb illustrations it tells the story of the thirteen-year old K’naan, whose family was suddenly confronted with civil war violence in Mogadishu and fled first to New York City and from there to Toronto, Canada.

Whenever K-‘naan did not feel well, was scared during the violence, or felt discouraged when he was picked on by schoolmates in Toronto, his grandfather would comfort him with the poetry lines: “When I get older, I will be stronger. They’ll call me freedom, just like a waving flag.” At school in Toronto, the story goes,

K’naan set these words to music and bridged the gap between himself and the other students at his school. Continue reading.

Publisher's Synopsis: “Wavin’Flag” has become an international anthem. Its powerful words of hope have crossed generations and borders, and have made K’NAAN an international star. In his first book for children, When I Get Older, Somali-Canadian poet, rapper, singer, and songwriter K’NAAN tells his own story. Born in Somalia, he grew up in Mogadishu. His grandfather was a renowned poet who passed on his love of words to his grandson. When the Somali Civil War began in 1991, K’NAAN was just thirteen. His mother made the difficult decision to move her family so that they could grow up in safety. First in New York and then in Toronto, K’NAAN faced many challenges.
Like so many other immigrants, he had to make a place for himself in a world of alien customs, clothes, and language. His road was a hard one: he lost many friends to violence. But K’NAAN’s love of music, and his enormous talent, became a way for him to connect with his past, with his classmates, and eventually, to millions of people around the world. Not only does K’NAAN tell a story that will inspire and encourage young readers, but he provides a brief history of the Somalian conflict. The lyrics of “Wavin’ Flag” are also included.
Born Keinan Abdi Warsame, K’NAAN first came to prominence when he performed a spoken word piece before the United Nations High Commissioner for Refugees in 1999. A member of the audience, the singer Youssou N’Dour, was so impressed that he asked K’NAAN to take part in an album and to tour with him.
Since then, K’NAAN has performed in more than 86 countries and has received many honors, including three Juno Awards and the BBC Radio 3 Award for World Music. During the Vancouver Olympics, he worked with other Canadian musicians and artists under the name Young Artists for Haiti to produce a charity version of “Wavin’ Flag.” The song was adapted again to become the FIFA World Cup theme song. There are now twenty-two versions of the song, which hit #1 in nineteen countries.