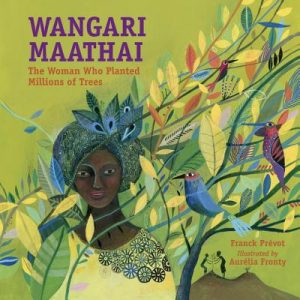 Wangari Maathai: The Woman Who Planted Millions of Trees by Franck Prévot and Aurélia Fronty (illus.) joins the list of picture books about The Green Belt Movement and its founder, Nobel Peace Laureate Wangari Maathai. Previous titles about Maathai include Wangari’s Trees of Peace: A True Story from Africa (Winter, 2008), Planting the Trees of Kenya: The Story of Wangari Maathai (Nivola, 2008), Mama Miti: Wangari Maathai and the Trees of Kenya (Napoli, 2010), and Seeds of Change: Planting a Path to Peace (Johnson, 2010). All of the “Mama Miti” authors’ celebrate Maathai’s ground-breaking concept of tree planting as a catalyst for environmental and socio-political action. Each compelling narrative shows and tells what can happen when an individual becomes an agent of change, fights for what is right, and stands firm against detractors.

Prévot provides a solid snapshot of Wangari’s early life, her lush village home, her education despite prevailing norms that kept girls at home, her study abroad, her transformation from conservationist to community organizer, and her transition from activist to Nobel Peace Prize Winner.  What sets Prévot’s book apart are his frank descriptions of racism Maathai experienced in the U.S. and Kenya and the struggles blacks waged in both countries against discrimination.

For the next five years, Wangari discovers snow, forests of skyscrapers, and people who look nothing like her. Even cornfields in America are different from those at home. Wangari also discovers that even in a great, free, independent country, some places are forbidden to black people. Just like at home, some schools are for white people only. During the 1960s angry African Americans demand the same rights as white people. At the same time, in faraway Kenya, another anger turns into triumph, for more than ten years, black people have been demanding the right to cultivate their land and govern their own country. Now they achieve independence from Britain at last. (Prévot)

Prévot also exposes the hypocritical behavior of moneyed Kenyans in the post-colonial period and their collusion with international capital.

…the British colonists are no longer the masters of Kenya. The country is free, but the trees are not —they still cannot grow in peace. Kenyans are cutting down trees and selling them as the colonists did. By using the land where the trees used to grow to cultivate the tea, coffee, and tobacco sought by rich countries, they can make more money. (Prévot)

Prévot identifies Wangari’s mother as the original source of her conservationist fervor. He includes a quote from her mother that Wangari never forgets, “a tree is worth more than its wood.”  He explains that Wangari combines her mother wit, academic training, and on-the-ground experience to explain the roots of rural poverty in Kenya. “Women can no longer feed their children, since plantations for rich people have replaced food-growing farms. Rivers are muddy—the soil has been washed away by rain because there are no tree roots to hold it back.” (Prévot) Continue reading.

Publisher's Synopsis: Wangari Maathai received the Nobel Peace Prize in 2004 for her efforts to lead women in a nonviolent struggle to bring peace and democracy to Africa through its reforestation. Her organization planted over thirty million trees in thirty years. This beautiful picture book tells the story of an amazing woman and an inspiring idea.