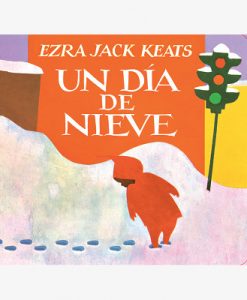 One morning many years ago, a little boy in Brooklyn named Peter woke up to an amazing sight: fresh snow.

Peter is the hero of the classic children’s book by Ezra Jack Keats, The Snowy Day, which turns 50 this year. Peter has a red snowsuit, a stick just right for knocking snow off of trees, and a snowball in his pocket. And, though this is never mentioned in the text, Peter is African American.

“It wasn’t important. It wasn’t the point,” Deborah Pope tells weekends on All Things Considered host Guy Raz. Pope is the executive director of the Ezra Jack Keats Foundation.

“The point is that this is a beautiful book about a child’s encounter with snow, and the wonder of it,” Pope says. Peter was among the first non-caricatured African Americans to be featured in a major children’s book. But Pope says Keats — who was white — wasn’t necessarily trying to make a statement about race when he created Peter. Continue reading.

NOTE: An English version is also available: The Snowy Day

"This translation of Keats's original Caldecott Medal winner captures the physical and emotional experiences of Peter and his delight in a snowfall." - School Library Journal