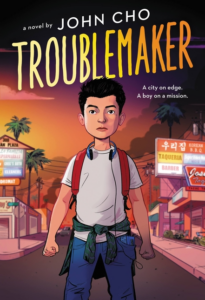 Jordan Park is convinced that he’s a disappointment to his parents. What makes it even worse is that they and his school principal have confirmed that to him. Since he can never measure up to his sister, Jordan opts to fall short with intention. He chooses questionable friends, cheats on tests and finds other short cuts to validate their claim. This novel is set in April, 1992 and Jordan is in middle school. The setting here is the LA Riots that were caused by the acquittal of charges against members of the Los Angeles police department for the brutal beating of Rodney King, a Black man, along with the fatal shooting of Latasha Harlins by a Korean American store owner. Maybe during this event, Jordan can do something that really makes a different. Cho explains in the author’s notes, “Though we settled on the title, Troublemaker, late in the process (not without trepidation on my part, as we were invoking the titan John Lewis’s admonition to get in “good trouble,” I did find the writing from the beginning to be an exercise in examining what is good and bad trouble. I thought about who gets to decide who’s a troublemaker, and who gets to decide what trouble is.” (p. 211-212)

In real life, author John Cho was inspired to write this book during the summer of 2020, the summer of Black lives matter and of anti-Asian hate, of protests and of disruption to the status quo. Cho entered the workforce as a middle school English teacher but is probably more well known as the Korean American actor who was in the Harold and Khumar movies, Star Trek movies (Hikaru Sulu) and Netflix’s Cowboy Bebop series. He was a college student during the time of the ‘92 riot. This book isn’t at all about Korean American and Black American relations, or the riot. I think it’s a reflection on how we define ourselves and how turbulent times can spur that process. Continue reading on Cotton Quilts.

Troublemaker follows the events of the LA Riots through the eyes of 12-year-old Jordan as he navigates school and family. This book will highlight the unique Korean American perspective.