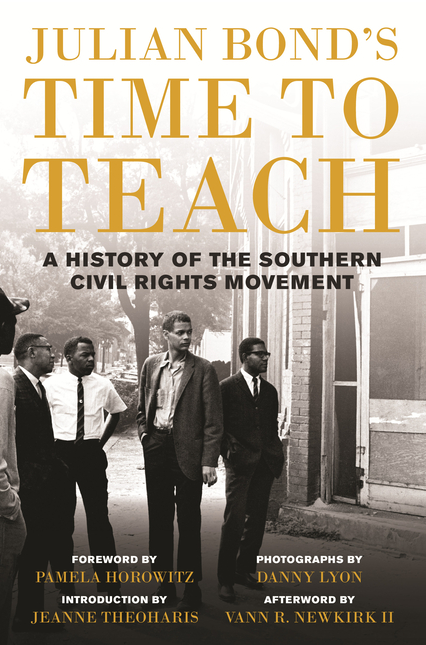 Horace “Julian” Bond was an influential social justice activist, politician, and visionary who is best known as one of the founders of the Student Nonviolent Coordinating Committee (SNCC). For over two decades, he taught a popular class at the University of Virginia on the history of the Civil Rights Movement.

Everyone who took a course with SNCC veteran Bond testifies to his depth of knowledge, storytelling, firsthand experience — and his wit. Bond transformed students’ understanding of the Civil Rights Movement and as a result, upended their perspectives on U.S. history and politics today. Thanks to Time to Teach, the rest of us can learn from the classes Bond taught for decades at the University of Virginia and American University. Continue reading.

Publisher's Synopsis: A masterclass in the civil rights movement from one of the legendary activists who led it.

Compiled from his original lecture notes, Julian Bond's Time to Teach brings his invaluable teachings to a new generation of readers and provides a necessary toolkit for today's activists in the era of Black Lives Matter and #MeToo. Bond sought to dismantle the perception of the civil rights movement as a peaceful and respectable protest that quickly garnered widespread support. Through his lectures, Bond detailed the ground-shaking disruption the movement caused, its immense unpopularity at the time, and the bravery of activists, some very young, who chose to disturb order to pursue justice.