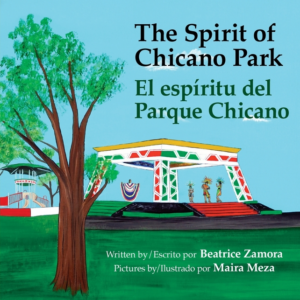 This bilingual picture book introduces young people to the Chicano Park Takeover in Barrio Logan, San Diego in 1970. The narrative begins in the present day with Bettie and Bonky, siblings that move to Barrio Logan with their parents. When they go out to explore their new neighborhood, they discover Chicano Park, a vibrant and magical place under the Coronado Bridge. The siblings are in awe of the colorful, monumental murals that celebrate Chicanx/Mexican figures.

A mural of a woman standing fiercely, wearing a shirt with a raised “power to the people” fist stands out to the siblings and when they wonder aloud who she is, like magic she appears in front of them to take them through the historical journey of how Chicano Park came to be the beautiful place it is today. La Señora tells the children how the community of Logan Heights worked against the destruction of their land by reclaiming it and building Chicano Park from the ground up.

This recollective narrative tells of the activist efforts of Chicanxs/Mexicans finding a unified voice and standing up for the preservation of their heritage and right to self-determination. Children today take away an essential message — that it’s important to learn about the history of the land you reside on and become a part of the movement to protect it.

For Betty and Bonky, Chicano Park is a lively place with a Kiosco for cultural celebrations, a playground with slides and swings, and intricately painted pillars. But the children also learn that the park’s spiritual journey is just as inspiring as its appearance. La Señora, an important figure in the park takeover and a central character in the book, spiritually dissociates from her mural painting to inform the children of the park’s history. Betty and Bonky are transported back in time to La Señora’s childhood when she used to smell the aromas wafting from La Panadería and La Tortillería every morning and play with her best friend through the streets.

But then one day, bulldozers arrived and the city government destroyed many homes to build the Interstate 5 Freeway and the Coronado Bridge. Many residents were left homeless and had to relocate, including La Señora’s best friend. Along with the construction came air pollution from junkyards and toxic factories. Betty and Bonky are appalled and ask La Señora if anyone spoke up. La Señora admits that while it wasn’t fair the government was buying homes for low prices to tear them down, it felt like the people of Barrio Logan had no choice but to comply and they feared that if they raised their voices, they would go unheard. 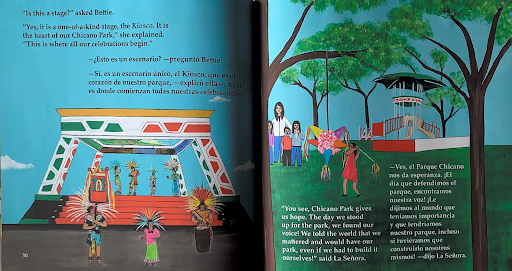 Betty and Bonky are quick to ask if anyone spoke up in the beginning phases of the destruction of Barrio Logan without realizing that their own privilege of speaking fearlessly was made possible by the people of Barrio Logan fighting for their human rights decades earlier. When the City of San Diego went back on their promise to the community members of Barrio Logan to build a park and instead embarked on a process to build a highway patrol station, the people declared “¡YA BASTA!” (p. 25).

Mothers with children, high school and college students, and visionaries all came together to occupy the land and build the park that was promised to them. They formed a human chain to stop the bulldozers and camped on the land for twelve days, building the park plant by plant. After months of this hard work, the city finally helped the community build their park. Chicano Park was founded on April 22, 1970, and declared a United States National Historic Landmark in 2016. Chicanxs/Mexicans annually celebrate the park’s founding as a testament to their hope, resilience, and pride. Although La Señora is never named, the children decide that she is “an abuelita angel watching over the park.” (p. 36) La Señora could symbolically stand for all of the foundational figures of the park takeover and spiritually represent all of the ancestors that fought for self-determination and self-empowerment.

I recommend this book for upper elementary children given the amount of text on the page, but it can also be used for a read aloud to lower elementary children. The book provides more context at the end with a timeline of historical events and more information on the organizing of the park by community members.

Publisher's Synopsis: Join Bettie and Bonky as they discover a magical park located in the most peculiar place, under a bridge! They learn to love their new home in Barrio Logan, a neighborhood with a rich history in San Diego, California. Through the eyes of a mystical señora they travel through a historical journey of a community's struggle to build a park.

The Spirit of Chicano Park/El espiritu del parque Chicano is a bilingual children's picture book that depicts the history of the creation of a historic park located in the community of Logan Heights in San Diego, California. The park was founded in 1970 as a result of a community Take Over of the land. The park was born out of a community's struggle to create a place for family gatherings amidst the destruction of their community through the enforcement of eminent domain and the building of Interstate 5 freeway and the Coronado Bridge.

The park is located underneath the Coronado Bridge. Massive cement pillars support the bridge and fill the park's landscape. Community artists painted murals on the pillars that depict the history of the park and the history of the Chicano community. Housed in the center of the park, is a one-of-a-kind stage, called a Kiosco. The park is a living legacy of the people of Logan Heights, now also known as Barrio Logan. It is a vibrant park with community activities, dance ceremonials, and political gatherings occurring on a regular basis.

Chicano Park is known nationally and internationally because of its art, but also because it became a symbol of hope and self-determination for the Chicano/Mexican-American community throughout the United States. The park was designated as a Historical Landmark in 2016.

The book is a full color, historical fiction and magical realism children's book written in English and Spanish. The back pages of the book showcase profiles of community organizers, artists, dancers, musicians, low-riders, and other activists who have been instrumental to the park's development.