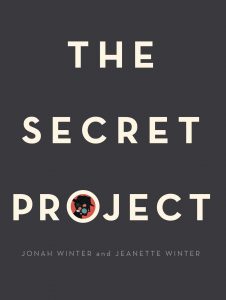 Some conversations about my review of Jonah and Jeanette Winter’s The Secret Project suggest that I didn’t say enough, back in March. I’m back, therefore, to say more. Some of what I wrote in March is being interpreted as innuendo and destructive. In saying more, this review is much longer. I anticipate that some who read it will continue with the “nit picking” charge that has already been leveled.

Some people read my reviews and think I’m being too picky because I focus on seemingly little or insignificant aspect of a book. The things I pointed out in March were not noted in the starred reviews by the major review journals, but the things I pointed out have incensed people who, apparently, fear that my review will persuade the Caldecott Award Committee that The Secret Project does not merit its award.  Continue reading.

Publisher's synopsis: Mother-son team Jonah and Jeanette Winter bring to life one of the most secretive scientific projects in history—the creation of the atomic bomb—in this powerful and moving picture book.

At a former boy’s school in the remote desert of New Mexico, the world’s greatest scientists have gathered to work on the “Gadget,” an invention so dangerous and classified they cannot even call it by its real name. They work hard, surrounded by top security and sworn to secrecy, until finally they take their creation far out into the desert to test it, and afterward the world will never be the same.