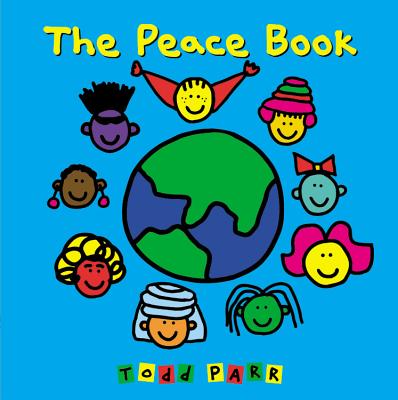 “We’re all the same on the inside.”

Most of us have heard people profess their ability to look past difference by saying that, deep down, humans are all the same. While the intent behind these words is usually admirable, those who erase or miscast difference in the service of tolerance can sometimes unthinkingly impose their narrative of normal, at the expense of others’ very real differences in culture and values.  Such is the problem of The Peace Book, by Todd Parr, which attempts to teach children to embrace difference and peace while struggling with some of the same issues it intends to overcome.

The Peace Book by Todd Parr is a striking book, each page a different bright color with bubbly, hand-drawn cartoon characters whose skin tones range from brown to blue. On each page, a sentence starts with “Peace is.” Peace can apparently be any number of things, from growing a garden, to hugging, to watching it snow. The book makes many unstated assumptions that allow us to draw conclusions about the intended audience – white, middle to upper-class American children. For example, “[p]eace is giving shoes to someone who needs them” is a very comfortable sentiment for someone who has never lacked for shoes, and fails to address the root cause of the need. “Peace is traveling to different places” works very well for someone who has the money and mobility to travel – and for whom travel is voluntary. “Peace is learning another language” seems innocuous until we notice that the figures on the page are speaking Japanese, German, Spanish…and Fish and Cat. The book makes no allowance for a child that already – or mostly – speaks another language than English (and then no African or Middle Eastern languages), and invites the startlingly offensive parallel of non-English languages to animal noises.

The art speaks depressingly of the author’s limited, inaccurate and often offensive ideas for characterizing people and practices other than the white American standard. “Peace is listening to different kinds of music” depicts a snake-charmer, an trope historically used by the West to exoticize South Asian cultures. The page for “[p]eace is wearing different clothes” creates another offensive parallel between two people shown standing side by side – one in a clown costume, one in an incorrectly drawn niqab. In conjunction with the illustration on the “[p]eace is traveling” page, a person on a camel in a featureless desert, the reader is presented only a caricature of the Middle East and Muslims. As we know from our current political reality, stereotypes of the Middle East and Muslims have had very real and dangerous consequences for people worldwide. When we consider that in recent years most Americans have traveled to the Middle East as soldiers, and that the US depends primarily on the Middle East for the huge amounts of fossil fuels it uses in travel, “[p]eace is traveling” reads as painfully ignorant.

As mentioned before, the human characters in The Peace Book often appear in skin colors not found in nature. However, these are not evenly distributed, and deserve closer examination. Given the range of human skin tones, the fact not a single “main character” has brown or tan skin is troubling. The author is perfectly capable of incorporating brown skin tones, as is evident from the “making new friends” and “being who you are” pages, but brown is apparently only fit for the “group photo”-style layouts. Humans used on pages that refer to some nominally non-white Western culture have a bright yellow or orange skin, except for one, whose skin is blue. The blue character, shown speaking Spanish on the “different languages” page, may alienate children who are already marginalized (as “aliens”, often) in much of the United States because of their race or language. I am also concerned that the Japanese-speaking character has bright yellow skin, as it plays into the pernicious stereotype of “yellow people.”

On the last page, Parr fills the space with these words: “Peace is being different, feeling good about yourself, and helping others. The world is a better place because of YOU!” I take issue with this ethos, a particularly facile one. Peace, very literally, is the cessation of violence. The things listed in the book are products of a peaceful society, perhaps, but not peace itself. The book’s implicit assertion is that being nice, and doing what one enjoys and is privileged to do in a peaceful society, are bound to make more peace, when we know that simply living our way of life engenders numerous negative consequences for people around the world. A child reading this pablum should be old enough to understand more concrete methods of teaching peace. As for the other elements – difference, good self esteem and helping others – a number of other children’s books engage with these themes in a fun and respectful manner.

It may seem to Parr that a child can only conceive of peace as “having enough pizza in the world for everyone,” but we must trust enough in our children to teach them about the underlying notion of world hunger, and that other foods than pizza will be on the menu when it ends. I respect the deep, transformative, radical, difficult work that peace can be. We need a little more faith in the capacity of our children to handle the idea that peace can be hard, can be stretching one’s boundaries, can be changing one’s way of life to preserve another’s.

SYNOPSIS: Peace is making new friends.Peace is helping your neighbor.Peace is a growing a garden.Peace is being who you are.
The Peace Book delivers positive and hopeful messages of peace in an accessible, child-friendly format featuring Todd Parr's trademark bold, bright colors and silly scenes. Perfect for the youngest readers, this book delivers a timely and timeless message about the importance of friendship, caring, and acceptance.