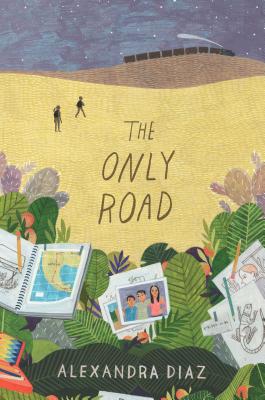 A recipient of a Pura Belpré honor, Alexandra Diaz’s The Only Road is chilling and heart-wrenching in the best possible way. From the moment that Jaime’s beloved cousin Miguel is killed by a local gang, the Alphas, it is evident that this book is going to take its reader on a perilous journey, tagging along with Jaime as he flees his small town in Guatemala for the United States. Continue reading.

PURA BELPRÉ HONOR BOOK ALA NOTABLE BOOK
“Powerful and timely.” —Booklist (starred review) “An important, must-have addition to the growing body of literature with immigrant themes.” —School Library Journal (starred review)
Twelve-year-old Jaime makes the treacherous and life-changing journey from his home in Guatemala to live with his older brother in the United States in this gripping and realistic middle grade novel.
Jaime is sitting on his bed drawing when he hears a scream. Instantly, he knows: Miguel, his cousin and best friend, is dead.
Everyone in Jaime’s small town in Guatemala knows someone who has been killed by the Alphas, a powerful gang that’s known for violence and drug trafficking. Anyone who refuses to work for them is hurt or killed—like Miguel. With Miguel gone, Jaime fears that he is next. There’s only one choice: accompanied by his cousin Ángela, Jaime must flee his home to live with his older brother in New Mexico.
Inspired by true events, The Only Road is an individual story of a boy who feels that leaving his home and risking everything is his only chance for a better life. It is a story of fear and bravery, love and loss, strangers becoming family, and one boy’s treacherous and life-changing journey.