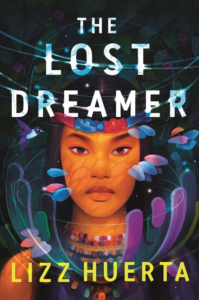 MY TWO CENTS: From the very first sentences, when Indir is awoken, afraid and disoriented, by the trumpeting of a conch shell, The Lost Dreamer, Lizz Huerta’s stunning debut, pulls readers into the dreamy and rich world of a magical, uncolonized Central America. Indir holds an esteemed position as a Dreamer who can divine the future or look more deeply into present occurrences, guided by the spirits she encounters in the Dream. However, Indir’s ability to Dream is lost before the book begins, begging the question if she is the Lost Dreamer whose appearance has been foretold.

Told in alternating chapters, however, the reader is pushed to question if it is Indir or Saya, another Dreamer who has been whisked from place to place by her mother, who is the Lost Dreamer. Saya’s mother exploits her daughter’s gift to enter the Dream, and Saya starts to question her mother’s motivations, especially because they make it impossible for Saya to form attachments to anyone or to settle in one place.

The interwoven narratives between Indir and Saya feel as if the two are being pulled toward each other, bound by the tension of the prophecy of the Lost Dreamer. While I will refrain from delving deeper into the plot of the novel, lest I spoil its fantastic twists and turns, I do want to highlight just how much this novel kept me on the edge of my seat! I was compelled by Indir’s and Saya’s stories, pulled into their web. Huerta’s writing style is somehow both straightforward and lushly descriptive. The plot and various secondary storylines are intriguing and Huerta’s prose does well to make such stories come to life. Each character (even beyond Indir and Saya) has a unique fingerprint on the story, so much so that I was yearning for novels from their perspectives.

The magical world Huerta has crafted within this novel is punctuated with Indigenous motifs and themes. Ancient Mesoamerican cultures are at the forefront of this novel. Huerta blends both real, Indigenous life practices and rituals alongside the magic and spiritual connections that buoyed these populations. Though I am often hesitant of novelizations of Mesoamerican religious and spiritual practices, especially those which turn such practices into magic or fantasy, Huerta honors her subject material. It is clear that Huerta has done her research and has a deep historical and cultural understanding of her topics.

I highly recommend The Lost Dreamer for myriad reasons: It is beautifully written; it is historically relevant; it is magically captivating. What’s more, the novel ends on a slight cliffhanger, leaving readers yearning for a sequel (forthcoming hopefully soon!!).

TEACHING TIPS: Because of The Lost Dreamer’s pre-colonial Indigenous content, it is an excellent entrance point for teachers seeking to introduce students to Mesoamerican populations and cultures. The depiction of Saya, in particular, as a peripatetic character is of particular interest. I often find that generic lessons about Mesoamerican Indigenous populations are static—not just in terms of their location, but also their lack of change. Saya’s positionality as a character who travels both across the continent and between spiritual worlds is particularly compelling in this regard. I suggest that teachers utilize this novel as a way to teach Indigenous cultural and spiritual practices; it is also an excellent example of magical historical fiction. The creative elements of the novel would also be of use for creative writing teachers.

Publisher's Synopsis: A lush, immersive debut fantasy about a group of women whose way of life is threatened by a new king; a fierce celebration of community, sisterhood, and finding our power. Indir is a Dreamer, descended from a long line of seers; able to see beyond reality, she carries the rare gift of Dreaming truth. But when the beloved king dies, his son has no respect for this time-honored tradition. King Alcan wants an opportunity to bring the Dreamers to a permanent end—an opportunity Indir will give him if he discovers the two secrets she is struggling to keep. As violent change shakes Indir’s world to its core, she is forced to make an impossible choice: fight for her home or fight to survive.

Saya is a seer, but not a Dreamer—she has never been formally trained. Her mother exploits her daughter’s gift, passing it off as her own as they travel from village to village, never staying in one place too long. Almost as if they’re running from something. Almost as if they’re being hunted. When Saya loses the necklace she’s worn since birth, she discovers that seeing isn’t her only gift—and begins to suspect that everything she knows about her life has been a carefully-constructed lie. As she comes to distrust the only family she’s ever known, Saya will do what she’s never done before, go where she’s never been, and risk it all in the search of answers.

With a detailed, supernaturally-charged setting and topical themes of patriarchal power and female strength, Lizz Huerta's The Lost Dreamer brings an ancient world to life, mirroring the challenges of our modern one.