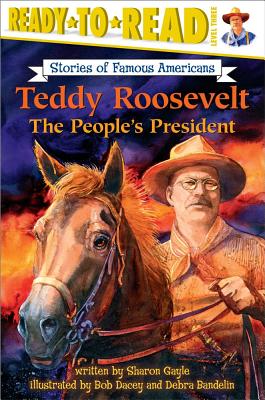 Like many children’s biographies, Teddy Roosevelt: The People’s President by Sharon Gayle celebrates Roosevelt’s perseverance and rise to power, but misses his failings, shortcomings, and the nuances of his life. Thus, while imparting valuable lessons about determination, the book glorifies militarism and erases people of color and women from the historical record; consequently, it fails to give young readers an accurate depiction of historical events.

The book begins with a battle cry. In the “hot and sticky” air of Cuba surrounded by “snakes and insects,” Roosevelt commands his soldiers to “Charge!” This opening depiction of the Spanish-American War centers the book on themes of militarism; in fact, Gayle describes the Spanish-American War as “the most exciting time” in  Roosevelt’s life. Word choice such as “hot and sticky” and references to dangerous wildlife exoticize Cuba as an other-worldly place. Curiously, while Cuba’s wildlife and Roosevelt and his men are featured on the book’s first page there is no reference to the Cuban people, it is only later in the book that Cuban rebels are briefly named.

A concept like genocide would be out of reach for young readers, however, a concept like how some hunters purposefully killed buffalos to hurt Indigenous American communities because they relied on the buffalo for food, shelter, and other materials would be a concept that young readers could understand. The erasure of Indigenous Americans from a biography of Roosevelt is especially troubling because of his comments like, “I don’t go so far as to think that the only good Indians are dead Indians, but I believe nine out of ten are, and I shouldn’t like to inquire too closely into the case of the tenth.”

Also, the book alludes to Roosevelt’s efforts in land conservation with the creation of national parks and monuments, and, while preservation of natural areas is critical, the book misses an opportunity to reference how these lands and all lands were indigenous lands, sometimes their very names taken from various tribes. Therefore, the book’s glowing portrayal of Roosevelt as a man of the people egregiously restricts the definition of the people to white men.

This truncated definition of the people also conceals the stories of immigrants during President Roosevelt’s administration. During Roosevelt’s administration, he signed into law the Immigration Act of 1907 which largely restricted Japanese immigration. Indeed, the United State’s immigration is one of racialized exclusion.  By not addressing this complicating history we give young readers the perception that the United State’s has always lived up to its espoused creed.

The absence of the stories of women not related to Teddy Roosevelt also misses an opportunity to discuss democratic values like suffrage. Although Gayle writes of Teddy Roosevelt’s popular electoral support, Black suffrage rights were not protected and women did not have the vote. While women didn’t have the vote during Roosevelt’s time in office, he was a known supporter of women’s suffrage for white women.

The book has its failings, but it also imparts lessons about perseverance. Gayle discusses Roosevelt’s poor health as a child and how he worked with his family to grow stronger. Especially for children who struggle with health issues, such a narrative can be encouraging.  However, while such stories are critical, narratives that accurately tell history by including the presence of people of color, women, and marginalized identity are crucial particularly when that narrative is concerned with a public leader. Teddy Roosevelt: The People’s President, unfortunately, does not tell a complete story.

Kathleen Nganga was an intern with Teaching for Change in the summer of 2018 as part of her Truman Fellowship.

Teddy Roosevelt had poor health throughout his childhood, but that didn't keep him from his love of nature or books. Teddy grew up to be strong and healthy. He became a fearless war hero and the youngest United States president.