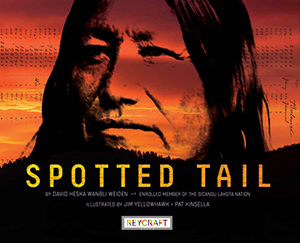 Nineteenth-century Sicangu Lakota leader Spotted Tail (Sinte Gleska) is the subject of a new biography for middle grades, by David Heska Wanbli Weiden (Spotted Tail, Reycraft Books, 2019). Spotted Tail was highly influential, but is generally less well-known than other Plains leaders of his time, such as Crazy Horse and Sitting Bull.

The book’s four sections or chapters — Early Years, Warrior, Family Life, and The Chief — are followed by two pages that explain some Lakota customs, and 2 pages appropriately titled “A Short History of the Lakota People.” (It’s very short.)

This story of Spotted Tail’s life opens with a description of his participation, as a boy, in a buffalo hunt. It ends with a brief account of his 1881 murder and its eventual repercussions for Indian law, and some paragraphs about his legacy. Continue reading.

Publisher's Synopsis: This biography of Spotted Tail traces the life of the famous Lakota leader who expertly guided his people through a pivotal and tumultuous time in their nation's history as they fought and then negotiated with the U.S. government. Spotted Tail is remembered for his unique leadership style and deep love for his people. Today, a university is named in his honor.