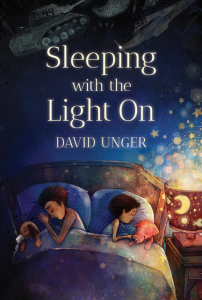 Sleeping with the Light On is a short chapter book recounting one family’s experience during the first days of the CIA-sponsored Guatemalan coup d’etat in 1954. The story is peppered with anecdotes about young protagonist Davico’s daily life in Guatemala City, such as his fascination with Ghenghis Khan, the restaurant lobster, his interactions with the chef and waiter at La Casita, and his bike rides around the fountain in la Plaza de la Constitución near the Palacio Nacional. (The title refers to Davico’s battery-powered lamp his father buys him to help him sleep during blackouts.) As the political situation deteriorates, the business fails and the family must flee to the United States to rebuild their lives. The story ends with Davico adjusting to french fries, baseball, and learning English while reminiscing about his Guatemalan past.

Novels about the atrocities of war are difficult to write, but Unger provides glimpses into the conflict without getting overly graphic. He skillfully describes the fear and anxiety the family feels while maintaining life at La Casita during a period of destabilization. The novel is written for an upper elementary or middle school audience, and the action flows quickly and smoothly. The details of the coup — and the ongoing violence — are never fully explained, making this book appropriate for younger audiences. Since the story is told from his perspective, readers grow to know Davico — his quirks, fears, and understandings about what is happening around him. Unfortunately, the other characters — including his brother, Felipe, and his mother, father, and nanny, Consuelo — are never fully developed. The adults provide exposition about the political unrest, but readers learn little else about them. At the end of the book, the reader will certainly celebrate the family’s good fortune to move to Miami where Davico’s parents have found work, but may also wonder: What happened to Consuela, the restaurant workers, the shoeshine boy, and the Indigenous people we meet along the way? It seems that providing a more omniscient view of the coup through these characters’ eyes is an opportunity Unger missed.

Carlos Vélez Aguilera’s whimsical, cartoony illustrations at the start of each chapter provide mirth, but they lack references to the unfolding conflict. Like Unger’s sparse depictions of reality, most of Aguilera’s illustrations are from within the darkened restaurant, giving us little insight into just what was happening outside. The only reference to the war was Davico watching the bomber dropping propaganda leaflets on the town. The illustrations are age appropriate, but readers must imagine much of what transpires.

It is important to note that this story describes the effects of a national conflict on an affluent family, and their fairytale ending is sadly not indicative of the fate of many Guatemalans during this time. The one-page author’s note at the end only hints at the role the United States played in the destabilization of Guatemala and the ensuing bloody forty-year civil war. However, I recommend this book for young readers because it makes a painful period of Guatemalan history accessible to elementary school children and because few chapter books have been written about this topic.

Publisher's Synopsis: Life in Guatemala is simple for young Davico and his older brother Felipe . . . until soldiers invade, and the blackouts begin.
Davico lives with his family above La Casita — the Little House — in Guatemala City in the early 1950s. But it’s not just a little house. It’s also the family restaurant!

The restaurant provides plenty of distraction and adventure for Davico and his older brother, Felipe. The mean cook, Augusto, and the always-late waiter, Otto, love to play tricks on Davico. There’s a huge oven that Felipe knows how to light — if he can only reach the box of matches above the stove. And don’t forget the glass tank of live lobsters — including the king of them all, Genghis Khan, who stares at Davico with round unblinking eyes. Could Genghis Khan climb on the back of the other lobsters and get out of the tank, Davico wonders. Could he move faster on land than in the water?

Then one day, Davico hears shooting in the streets. There are blackouts every evening, and the family must sleep under the big wooden table in the dining room. People stop coming to the restaurant, and tanks and soldiers swarm the front of the National Palace, where a shoeshine boy warns the brothers that the gringos are coming.

But what does that mean, and who are the gringos?

Davico wants to be brave, but the shooting and tanks and airplanes flying overhead terrify him. He finds comfort in the special lamp that his father buys him to endure the blackouts. But it is not enough to console Davico when his parents announce that it’s time to leave for the United States of America, where no one speaks Spanish, and everything is different.