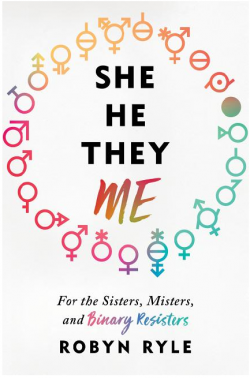 In the words of Dr. Robyn Ryle, “Gender is an epic adventure.” In her book, She, He, They, Me: For the Sisters, Misters, and Binary Resisters, Dr. Ryle provides readers the opportunity to embark on a self-determined gender journey. Written in the “pick your own adventure” style, readers choose what chapter they will read next based on where they want their journey to go. The book comprises of numerous gender journeys which incorporate an analysis of how gender intersects with race, culture, dis/ability, and socioeconomic status. In the United States, people often are not exposed to the concept that gender is socially constructed, meaning that gender has meaning because our society gives it meaning. Therefore, She, He, They, Me is a fantastic primer for anyone trying to comprehend not only how gender is shaped, but how gender shapes us. Moreover, it allows readers to empathize with others on a different gender journey from themselves. While the chapters are short, the message is clear: the gender binary harms all of us, and gender can be as expansive as the universe itself. Each person’s experience is individually unique, and Ryle empowers readers to follow their instincts and make their own choices regarding their personal gender journey.

Society largely neglects how there are not only more than two genders, but more than two sexes. In the United States, one out of every 1500 babies are born intersex. However, this reality is rarely addressed in any sex education, and in the small chance that it is, there is rarely any substantive discussion. Dr. Ryle incorporates intersex people’s realities into her book. She describes the human condition as it relates to intersex people in a way that is often not addressed, referencing medical information and personal narratives. This acknowledgment of intersex people is crucial to help readers recognize the humanity of an often erased population and eliminate the false binaries of both sex and gender.

While the book predominantly examines gender through a western European lens, it does incorporate a fair amount of cultural and racial nuance. Readers will learn about the Indian hijra, Mohave alyha, Balkan sworn virgins, and the Mundugumor people in New Guinea. Given that each chapter is about one or two pages, there is obviously not an in-depth discussion about these identities. But the purpose is not to delve deep into a single identity, but be introduced to the expansive world of possibilities.

A weakness of this book is that it centers cisgender people (those whose gender assigned at birth aligns with their gender identity). With the title being For the Sisters, Misters, and Binary Resisters, I was personally expecting the book to incorporate more journeys that centered genderqueer and nonbinary people. Despite how Dr. Ryle incorporated several chapters about transgender people’s journeys, I think the book may leave readers who identify outside of the binary feeling disappointed. For example, a reader can choose if their parents accept or reject their nonbinary gender identity. After that decision, readers can either continue on their nonbinary path for approximately another chapter, or be told that they need to hide their true gender identity for now. While I understand that is a common experience for transgender, non-binary, and genderqueer people, it left me feeling shortchanged, given how the book’s cover implies a more in-depth description of nonbinary people’s experiences. It would have been empowering to have the nonbinary gender journey have more substance, rather than merge back into a cisgender person’s journey for the remainder of the book. In my experience reading the book, the cisgender journeys lead to the conclusion, while the transgender, non-binary, and genderqueer journeys did not. As stated earlier, this book is a wonderful primer for those beginning to learn about gender, but for those with a grasp of the concepts Dr. Ryle seeks to teach, I do not think this book substantively addresses the experiences of nonbinary people.

Ultimately, Dr. Ryle introduces readers to the ever-widening, and at times magical, world of gender. Gender comes with countless expectations, assumptions, and inequalities. Dr. Ryle provides a useful tool for readers to challenge the dominant narratives pertaining to gender. I loved the conclusion of the book, which asserts that “there are always more questions to be asked, and always more complexities to explore.” This is the sentiment that empowers me to recommend this book. Dr. Ryle reminds us that there are no absolutes when it comes to a person’s gender journey. This book is obviously not an exhaustive journey, but all things considered, it is an informative one.

Publisher's Synopsis: If you've ever questioned the logic of basing an entire identity around what you have between your legs, it's time to embark on a daring escape outside of the binary box...

Open your eyes to what it means to be a boy or a girl -- and above and beyond! Within these pages, you get to choose which path to forge. Explore over one hundred different scenarios that embrace nearly every definition across the world, over history, and in the ever-widening realms of our imagination! What if your journey leads you into a world with several genders, or simply one? Do you live in a matriarchal society, or as a sworn virgin in the Balkans? How does gender (or the lack thereof) change the way we approach sex and love, life or death?

Jump headfirst into this refreshingly creative exploration of the ways gender colors every shade and shape of our world. Above all, it's more important than ever for us to celebrate the fact that there are infinite gender paths -- and each of them is beautiful.