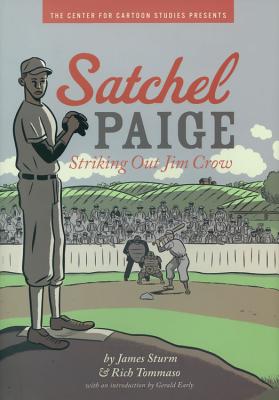 Though the title would suggest otherwise, Satchel Paige: Striking out Jim Crow isn’t exactly a biography of the famous Negro League pitcher, Satchel Paige. The story is not told from his perspective and for the most part we don’t get too much information about Paige’s personal life.

But what this artful little graphic novel lacks in biographical insight, it more than makes up for in storytelling, historical depth, and its exploration of racial issues. Overall, it is a neatly drawn, well-written story that goes beyond what young readers typically learn about Jim Crow America.

Instead of presenting a traditional biography of Paige, the book employs fictional narration and intersperses it with small pockets of information about Paige’s career.  The narration is that of Emmet Wilson Jr., a sharecropper from Alabama. Readers follow Emmet’s journey as he goes from being a rookie player in the Negro Leagues, batting against Paige himself, to being a laborer for wealthy, white landowners. The book climaxes when Paige’s team comes to Emmet’s town to play against the local all-white baseball team, the Tuckawilla All Stars. After years of not playing, the book ends after Emmet gets to see his old rival strikeout the very same men he works for.

The decision to tell the story from Emmet’s perspective, as opposed to Paige’s, is a compelling one. More than anything, it allows for a more complex portrayal of the racism that existed during Paige’s time. Instead of lingering on classic textbook examples of Jim Crow – segregated public spaces, separate baseball teams for blacks and whites – Emmet’s narration exposes the racial prejudice and privilege that existed in people’s attitudes and everyday behaviors. A prime example is the relationship between Emmet and his white employers, the Jennings twins. The twins, who know nothing about agriculture, patronize Emmet about his farming and let their livestock wander on to his crops. When they repeatedly catch Emmet working without his son, Emmet Jr. (who is at school), they react violently, beating Emmet Jr. on his way home from a neighbor’s house. Emmet’s reaction to all of this however, is to “humble down.” As he says, “What else was I to do?  Cry about my rights? Tell them I am bein’ mistreated? You do that and you die no different than Lucas Crutchfield.” These words are accompanied by a chilling panel,one that shows the silhouette of a man hanging from a noose.

Such segments effectively demonstrate to readers that Jim Crow racism was not merely a set of laws enforced by the government, but something created and carried out by the actions and attitudes of everyday people. More importantly, it was carried out against everyday African Americans, not just talented athletes such as Satchel Paige. Yet it is through reading about someone like Emmet that readers gain a profound appreciation for Paige as they can better understand the racism he had to endure as well as the hope he provided for his fans. Indeed, when Paige strikes out the all-white team towards the end of the story, it feels not so much a triumph for Paige as it does for Emmet and his son. Readers also feel this triumph, while knowing in the back of their minds that history has many more struggles to bring.

The book does have some drawbacks. For one thing, women are largely absent from the story.  Even Emmet’s wife, Frances, is mentioned only a handful of times. This isn’t surprising considering the story allows for little character development outside of Emmet. But given all the insight that Emmet’s narration provides us, one still wonders what a female experience like Frances’ would’ve looked like in that era, or what Satchel Paige would have meant to her (after all, men aren’t the only ones who take inspiration from athletic heroes).

Additionally, because of the way the plot jumps forward in time and between Emmet and Paige’s stories, the book could be confusing for some younger readers; it is probably best suited for a upper middle school/lower high school reading level. Not to mention, anyone unfamiliar with baseball might have a hard time understanding some of the narrator’s sports jargon. However, Rich Tommaso’s illustrations and the book’s comic format will definitely appeal to those students less eager to read. With a color palette of brown, black and white, Tommaso’s heavily inked drawings give the story a subdued, antiquated look, drawing the reader into the story’s setting.

Complete with an extensive introduction about the Negro Leagues and a section of panel discussion topics, this book is great for the home or for the classroom. And whether or not you’re a sports fan, comics lover, or simply wishing to learn more about American history, Satchel Paige: Striking Out Jim Crow is sure to enlighten both as a story as well as a glimpse into our country’s past.

Julie Smolinski is a writer and graphic novel enthusiast. In 2009, she wrote her senior thesis on masculinity and comic books and has since continued exploring the potential that graphic novels hold for inspiring readers.

SYNOPSIS: Baseball Hall of Famer Leroy "Satchel" Paige (1905? – 1982) changed the face of the game in a career that spanned five decades.  Much has been written about this larger-than-life pitcher, but when it comes to Paige, fact does not easily separate from fiction.  He made a point of writing his own history…and then re-writing it.  A tall, lanky fireballer, he was arguably the Negro League’s hardest thrower, most entertaining storyteller and greatest gate attraction. Now the Center for Cartoon Studies turns a graphic novelist’s eye to Paige’s story.  Told from the point of view of a sharecropper, this compelling narrative follows Paige from game to game as he travels throughout the segregated South.
In stark prose and powerful graphics, author and artist share the story of a sports hero, role model, consummate showman, and era-defining American./DIVDIV