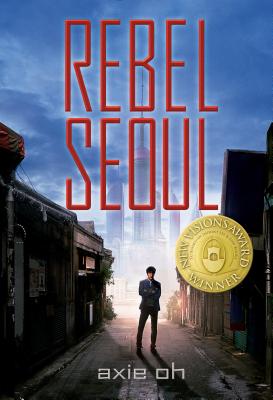 I knew I needed Rebel Seoul in my life the moment I heard it compared to mix of Pacific Rim and Korean dramas, and I was not disappointed. There were giant robots, fight scenes, complicated (and angsty) family relationships and (ex-)friendships, questionable loyalties, rebellions, and a lovely romance—basically, author Axie Oh delivered everything I had hoped for.

Jaewon was an excellent narrator whose position in life gave him a unique look at his far-future society. His priorities (getting a decent military placement, using it to leverage himself out of the Old Seoul slums, and just plain surviving) gradually started to shift as he learned more about the Amaterasu Project. It isn’t that he lost his innocence so much as he began to understand that there was a broader world out there with people who were more complex than he originally thought. There were some wonderful moments throughout the book where Jaewon considered someone else’s point-of-view, which radically changed how he saw them. Continue reading.

EAST ASIA, 2199. After a great war, the East Pacific is in ruins. In brutal Neo Seoul, where status comes from success in combat, ex-gang member Lee Jaewon is a talented pilot rising in the academy's ranks. Abandoned as a child in the slums of Old Seoul by his rebel father, Jaewon desires only to escape his past.

When Jaewon is recruited into the most lucrative weapons development division in Neo Seoul, he is eager to claim his best shot at military glory. But the mission becomes more complicated when he meets Tera, a test subject in the government's supersoldier project. Tera was trained for one purpose: to pilot one of the lethal God Machines, massive robots for a never-ending war.

With secret orders to report on Tera, Jaewon becomes Tera's partner, earning her reluctant respect. But as respect turns to love, Jaewon begins to question his loyalty to an oppressive regime that creates weapons out of humans. As the project prepares to go public amidst rumors of a rebellion, Jaewon must decide where he stands--as a soldier of the Republic, or a rebel of the people.