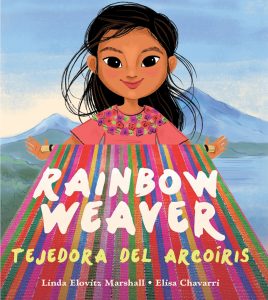 Reviewer Rebecca Lehr is an art teacher at a bilingual elementary school in Arlington, Virginia.

In a rural village in the Guatemalan Highlands, young Ixchel is anxious to learn the ancient art of weaving from her mother. Ixchel adores the vibrant colors and patterns of the textiles, and wants to help make and sell them to pay for her education. But her mother insists she is too young to weave, and they can’t spare any thread for her to practice. Industrious Ixchel decides to make her own loom and threads from natural materials around her village, but nothing she weaves comes out right. Losing hope of creating a textile beautiful enough to sell in the market, Ixchel has a stroke of genius–to collect the colorful plastic bags that litter the corn fields and turn them into thread for her loom. Ixchel’s work cleaning up the village and turning the plastic into works of art catches the attention of her neighbors, who help her collect and clean the bags. After she finishes her first rainbow weaving, she doubts whether anyone would buy it, but her mother insists they try. After it sells in the market, Ixchel feels happy and proud to be able to continue the tradition of her ancestors and help support her own education.

Rainbow Weaver’s charming story highlights the art, culture, and economic status of indigenous Guatemalans. The beautiful illustrations feature real photographs of Mayan textiles mixed in with original artwork. The book is bilingual, with a fluid Spanish translation and lots of vocabulary in both languages pertaining to the art of weaving. While all the characters are rural villagers, which could give the impression that all Guatemalans, especially indigenous ones, are poor farmers, the characters are based on real indigenous people, and it is just one story about a group of people whose stories are rarely told in children’s books. The author is not Guatemalan, but her author’s note explains that she has longstanding relationships with Mayan weaving cooperatives and sought their feedback on the book before publishing it. A portion of the proceeds benefits the cooperatives.

Since state and national Visual Arts standards include weaving at various grade levels, this book would be appropriate in the art class for grades pre-K-5. The story is simple enough for young children, but older kids could have deeper conversations about the social and environmental themes, such as the pollution of the town with plastic bags, or the fact that Ixchel is not guaranteed an education.

Teachers and students could easily make connections between Rainbow Weaver and other texts. Abuela’s Weave also focuses on Guatemalan peasants, but gives a slightly more robust view of their lives. While it centers around a young girl, Esperanza, and her grandmother as weavers, it also shows traditional men’s roles in the home and at work. Illustrations of the bustling city center round out the portrayal of Guatemalans as mostly rural farmers and craftspeople. Most importantly, the story addresses the threat to traditional weaving posed by machine-made textiles. However, there is a somewhat unfortunate plot device: the grandmother has a large birthmark on her face, because of which many people call her a witch and refuse to buy her wares. While this forces Esperanza to be more independent, it also could inadvertently reinforce a view of indigenous people as backwards and superstitious.

Available in both Spanish and English, Mama and Papa Have a Store intersects with Rainbow Weaver and Abuela’s Weave while providing another unique viewpoint. Author-illustrator Amelia Lau Carling draws on memories of her own childhood as the daughter of Chinese immigrants who run a general store in Guatemala City. Through her eyes, we observe her family’s daily life, and get glimpses of the lives of other Guatemalans, including an indigenous family who takes the bus from their mountain town to buy thread at the general store and sell their wares in the market. Their textiles, along with all other details in the book, are beautifully illustrated. Our young narrator points out that the indigenous people don’t speak perfect Spanish, but doesn’t go into detail about their native language.

One Plastic Bag tells the story of a real group of women and girls in the Gambia that crochet purses out of plastic bags to clean up their town and generate income. While the story is similar to Rainbow Weaver, it goes into more detail about the environmental impact of the plastic bags. Unlike the traditional palm-leaf baskets, the plastic bags are not biodegradable, so water pools up in them, attracting mosquitos, and grazing goats die from ingesting the plastic. The story revolves around Isatou Ceesay, who is shown as a smart, creative, working mom who cares for her family and environment. However, she doesn’t succeed on her own, but rather relies on the support of her community, which includes an American Peace Corps volunteer. At the end of the story, readers can find an author’s note, map, glossary of Wollof vocabulary, and timeline of true events surrounding the creation and success of the crocheting group. These resources enrich the book with details that couldn’t all fit in one story.

For yet another perspective on weaving around the world, try Master Weaver from Ghana, a non-fiction book about Ghanaian textiles. Here, the men are the traditional weavers, but as in Guatemala, the art of weaving is a family affair, and knowledge is passed down from one generation to the next. Photographs illustrate the many instruments and processes of weaving. The book includes maps for context and differentiates between the textiles of different cultural groups. Master Weaver from Ghana would be especially useful for teaching weaving to young children, who enjoy the concreteness of photographs just as much as the abstraction of illustrations.

Rainbow Weaver is a delightful book that can be used across grade levels and content areas. Teachers could complement it with any one of a number of books, depending on the focus of their lesson (recycling/environmentalism, social and economic empowerment of women and children, textiles around the world, etc). All of these titles would be great additions to a classroom library in the art or general education setting.

Publisher's synopsis: Ixchel wants to follow in the long tradition of weaving on backstrap looms, just as her mother, grandmother, and most Mayan women have done for more than two thousand years. But Ixchel's mother is too busy preparing her weavings for market. If they bring a good price, they will have money to pay for Ixchel's school and books. And besides, there is not enough extra thread for Ixchel to practice with.
Disappointed, Ixchel first tries weaving with blades of grass, and then with bits of wool, but no one would want to buy the results. As she walks around her village, Ixchel finds it littered with colorful plastic bags. There is nowhere to put all the bags, so they just keep accumulating.
Suddenly, Ixchel has an idea! She collects and washes the plastic bags. Then she cuts each bag into thin strips. Sitting at her loom, Ixchel weaves the plastic strips into a colorful fabric that looks like a beautiful rainbow--just like the weavings of Mayan women before her.