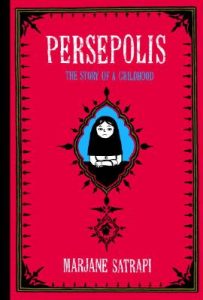 Marjane Satrapi was in elementary school when the Shah was ousted from power in Iran and a conservative Islamic regime took control. Because her family had communist and socialist leanings, as well as a distant familial relationship to the deposed Shah, they had to navigate a perilous political landscape. During this time, Marjane struggles to find meaning in the vast changes, the many injustices, and the specter of martyrdom and war that hung over her country. She wrestles with religion, school, and the authorities who place restrictions on clothing, make-up, and popular culture. Being questioning and rebellious, Marjane has to deal with seemingly mundane situations that suddenly deteriorate into danger.

This volume contains the first two chapters of the books originally published in France. It is followed by a sequel where we follow what happens to Marjane as she becomes a young adult. This volume is very episodic and provides many scenes from a country in conflict where one family is struggling to get by. Incidentally, the title of the book comes from the Greek name for Parsa, an ancient capital of the Persian Empire. Continue reading.

Wise, funny, and heartbreaking, Persepolis is Marjane Satrapi’s memoir of growing up in Iran during the Islamic Revolution. In powerful black-and-white comic strip images, Satrapi tells the story of her life in Tehran from ages six to fourteen, years that saw the overthrow of the Shah’s regime, the triumph of the Islamic Revolution, and the devastating effects of war with Iraq. The intelligent and outspoken only child of committed Marxists and the great-granddaughter of one of Iran’s last emperors, Marjane bears witness to a childhood uniquely entwined with the history of her country.

Persepolis paints an unforgettable portrait of daily life in Iran and of the bewildering contradictions between home life and public life. Marjane’s child’s-eye view of dethroned emperors, state-sanctioned whippings, and heroes of the revolution allows us to learn as she does the history of this fascinating country and of her own extraordinary family. Intensely personal, profoundly political, and wholly original, Persepolis is at once a story of growing up and a reminder of the human cost of war and political repression. It shows how we carry on, with laughter and tears, in the face of absurdity. And, finally, it introduces us to an irresistible little girl with whom we cannot help but fall in love.