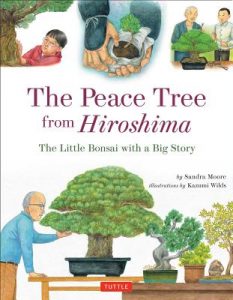 The Peace Tree from Hiroshima is narrated by the titular tree, a nearly four hundred year old bonsai that now resides in the National Arboretum. Throughout its long lifetime, the tree is passed down from generation to generation, and it witnesses many important events in lives of the Japanese family that cares for it, most notably the dropping of the atomic bomb in 1945. After the bombing, the tree becomes a symbol of resilience and growth, and through its eyes we see the people of Hiroshima begin the long task of recovery from the dropping of the atomic bomb. The tree is finally gifted to the United States by the Yamaki family that cultivated it for centuries, and their selflessness not only represents repaired relations between the US and Japan, but also creates a very deep personal connection between the Yamaki family and the new home of their beloved tree.

By centering the story around a tree, Moore creates a useful vehicle for learning about and understanding a very intense and difficult part of the histories of both the United States and Japan. The tree has great potential for providing young readers with a more palatable introduction to this event. However, the story describes the bombing very passively, mentioning only that Japan was involved in a war, and that in 1945 “Hiroshima was hit by an atomic bomb.” There is no mention of the United States’ role in the bombing until relations with Japan are being repaired, and the Yamaki family decides to send their bonsai to the States as a gift and a symbol of peace. While the symbolism of the tree provides a very nice lesson in endurance and forgiveness, the depiction of the conflict between the two countries runs the risk of absolving the United States of its guilt in the death of thousands of people and destruction of entire cities. Of course, it is very difficult to go into such a topic in detail in a children’s book, and I think Moore’s story is definitely one worth reading. I would only urge teachers to keep this in mind in sharing the book with students, and encourage them to change the wording of this part of the book when reading it allowed, or to pause and take time to have a more meaningful discussion of the history behind the book.

Publisher's Synopsis: This true children's story is told by a little bonsai tree, called Miyajima, that lived with the same family in the Japanese city of Hiroshima for more than 300 years before being donated to the National Arboretum in Washington DC in 1976 as a gesture of friendship between America and Japan to celebrate the American Bicentennial.
From the Book:"In 1625, when Japan was a land of samurai and castles, I was a tiny pine seedling. A man called Itaro Yamaki picked me from the forest where I grew and took me home with him. For more than three hundred years, generations of the Yamaki family trimmed and pruned me into a beautiful bonsai tree. In 1945, our household survived the atomic bombing of Hiroshima. In 1976, I was donated to the National Arboretum in Washington D.C., where I still live today—the oldest and perhaps the wisest tree in the bonsai museum."