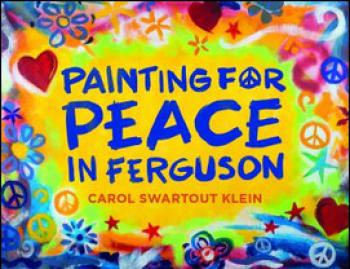 Painting for Peace in Ferguson by Carol Swartout Klein is a dismaying example of good intentions gone wrong. Using art to unite and heal in the face of adversity is a beautiful thing, but this book of photographs and trite, demeaning explanations of the unrelenting police brutality and finally uprising in Ferguson, Missouri, white-washes history and reality. As I flip through pages of photographs of people painting lovely murals of doves, hands, and hearts, I’m struck not by their beauty but by the absence of any explanation or images connected to what actually happened in August 2014.

The book is almost entirely photographs, with a basic poem throughout that describes absolutely nothing about the communities in Ferguson, the violence following Michael Brown’s murder, and the shock waves that the nation felt. Vague descriptions such as “Police were there/and protestors too/People were scared/Didn’t know what to do” were quickly followed by lots of cheerful people painting. The reader gets the impression that the problem characterizing Ferguson is ugly shop-fronts, not systemic racism.

It’s more than a missed opportunity to depict the police murder of Michael Brown as “some people did things that were meaner than mean.” It’s more than poor storytelling to gloss over centuries of violent policing and white supremacist control over Black bodies as “some people were mad/some people were sad.” It’s more than unfair to gloss over the police repression of the growing youth-led movement for Black liberation as “police were there/and protesters too.” Swartout Klein’s telling of the story is not just absurd and insulting; it’s harmful.

When we deny children an honest account of why violence happens, how it’s caused, and who is suffering, we prevent them from emotional healing. Maybe Swartout Klein believes that children cannot deal with learning about the violence and pain of racism and need to see only positive, loving images. However, children are not shielded from experiencing our violent world, and are smart enough to know that when adults only allude to violence, they’re covering up something that they think is too scary for children. They can tell when adults are scared. From this book, the only way to keep safe is to “lock their doors/board up windows tight” or to paint. But lock their doors and windows tight from what? From whom? This book is  about the aftermath of Michael Brown’s murder but  doesn’t once mention Michael Brown, much less racism, poverty, injustice, or the inspirational and strategic resistance of Black residents. It tells children that racism is too scary to speak about openly in an age-appropriate way. It teaches them that the threats they face are too scary to know and to name, which denies children the grieving, anger, and thoughtful understanding that they need to process the violence they witness in their lives.

Painting for Peace in Ferguson gives no explanation for why Ferguson erupted in violence on that night in August of 2014. The author attempts at a message of hope, but hope does not lie in pictures of (mostly) white people painting murals (despite its intended message, the pictures in the book show more white folks than any other races). A truly hopeful story would center on the abundant stories of resilience of Black communities building movements to resist centuries of white supremacy. We owe our children more than hope – we owe them tools to socio-emotional healing and survival.n

SYNOPSIS:After months of tension something appeared on the streets of Ferguson that hadn't been seen for a long time ... HOPE.  Through poetry and art, award wining PAINTING FOR PEACE IN FERGUSON tells the true story of hundreds of artists and volunteers who turned boarded up windows into works of art with messages of hope, healing and unity in the aftermath of the Ferguson, MO riots. Written in verse, the book focuses on the way the community came together to begin the healing process through the Paint for Peace effort. Using illustration and photographs of the art and the artists --black and white, young and old--the book is a tool for beginning the conversation with children about how we all have something to contribute to healing our communities. As the last line in the book says, "The work is not finished, there's much more to be done. But this art shows the spirit of a new Ferguson."
Profits from book sales are being reinvested in the Ferguson community.