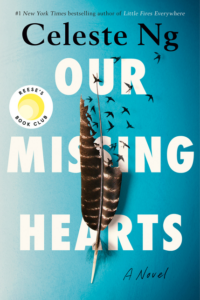 Ravenous With Story: A Profile of Celeste Ng

“Stranger than fiction” seems meaningless during a time — our time, now — when the unimaginable is a daily reality. Yet in her new novel, Our Missing Hearts, published in October by Penguin Press, Celeste Ng creates a dystopian setting that is a reminder of what is at stake, what we have to lose: “It started slowly at first, the way most things did,” she writes midway through the book. “[P]eople began to lose their confidence, their sense of purpose, the willingness to wake up in the morning, their ability to keep trying, their optimism that something could be different, their memory that anything had ever been different, their hope that anything would ever improve.” Those ominous sentences sound eerily familiar and refuse to let us turn away, capturing the tone for Ng’s third novel. “None of the things that are in this book are completely made up out of thin air,” the author acknowledges — or laments.

Ng says that she “spent a lot of time trying not to write this book.” Her debut novel, Everything I Never Told You, was published by Penguin Press in 2014, followed three years later by Little Fires Everywhere (Penguin Press, 2017), but Our Missing Hearts took nearly seven years to complete. It was, she says, “a difficult book to write” because, for one, she was working on another novel at the same time: “I had two ideas and was figuring out which one had the heat of the moment and was drawing me to it.” Currency was initially a source of concern: “My first two novels take place in the not-too-far-away past. It’s always been harder for me to write about things happening now because I need distance to step back and think about them — not with objectivity because I don’t know if that’s possible or even what writers should be doing. But with perspective.” She and her agent had agreed to move forward on the other novel and let this one percolate; then during the start of the pandemic, Ng says, “I realized this book was calling to me.” It was the book she needed to write not despite but because of its immediacy. Continue reading on Poets & Writers.

From the #1 bestselling author of Little Fires Everywhere, comes the inspiring new novel about a mother’s unbreakable love in a world consumed by fear. “It’s impossible not to be moved.” —Stephen King, The New York Times Book Review "Riveting, tender, and timely.” —People, Book of the Week

“Thought-provoking, heart-wrenching…I was so invested in the future of this mother and son, and I can’t wait to hear what you think of this deeply suspenseful story!” – Reese Witherspoon (Reese’s Book Club October ’22 Pick)

Twelve-year-old Bird Gardner lives a quiet existence with his loving but broken father, a former linguist who now shelves books in a university library. His mother Margaret, a Chinese American poet, left the family when he was nine years old without a trace. Bird knows to not ask too many questions, stand out too much, or stray too far. For a decade, his family's life has been governed by laws written to preserve “American culture” in the wake of years of economic instability and violence. To keep the peace and restore prosperity, the authorities are now allowed to relocate children of dissidents, especially those of Asian origin, and libraries have been forced to remove books seen as unpatriotic. Bird has grown up disavowing his mother and her poems; he doesn’t know her work or what happened to her, and he knows he shouldn’t wonder. But when he receives a mysterious letter containing only a cryptic drawing, he is pulled into a quest to find her. His journey will take him back to the many folktales she poured into his head as a child, through the ranks of an underground network of librarians, into the lives of the children who have been taken, and finally to New York City, where a new act of defiance may be the beginning of much-needed change. Our Missing Hearts is an old story made new, of the ways supposedly civilized communities can ignore the most searing injustice. It’s a story about the power—and limitations—of art to create change, the lessons and legacies we pass on to our children, and how any of us can survive a broken world with our hearts intact.