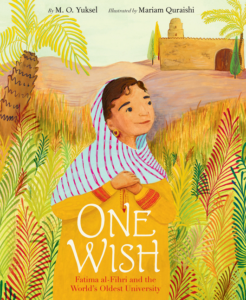 One Wish is a powerful narrative about a Muslim woman whose faith, passion, and determination led to something greater than herself. Fatima was born in a time and place where boys went to school and girls were tutored at home. Fatima wished that she could somehow change that. As a refugee and later losing her father and husband to illness, Fatimah’s resilience remained. She was grateful to the city of Fez that opened its arms to her and wanted to reciprocate that care for those who entered the city displaced and poor. Al-Qarawiyyin was not only the manifestation of Fatimah’s lifelong wish to build a school for all, but was also her fulfillment of sadaqah jariyah, continuous charity. Yuksel emphasizes Fatimah’s participation in the process of building al-Qarawiyyin, drawing up plans and making design decisions to show the rarity of a woman becoming an independent, active agent of change around 859 CE when the school was established. Today, al-Qarawiyyin is the oldest institution in the world for higher education that is still in operation.

Yuksel notes at the end of the narrative, “Little is known about her [Fatimah’s] childhood or private life; hence, I took the liberty of reconstructing her early years based on historical and cultural information.” (p. 27) While it’s nearly impossible to depict a completely accurate story about an early figure, it’s important to discuss potential gaps with children and encourage them to research further on their own and use the backmatter bibliography as a guide.

I recommend this book for elementary readers as it introduces the trailblazer, Fatima al-Fihri, and teaches children the value of education, but I would also use this book as an example of how an author’s creative liberty may affect the credibility of nonfiction.

Fatima al-Fihri loved to learn. She wanted to know everything, like how birds flew, why the sky was blue, and how flowers grew. But more than anything, she wanted a school for all, where anyone could study and become whatever they wanted, like teachers, scientists, and doctors.

As she grew older, Fatima carried her one wish inside her, through good times and bad. Fueled by her faith and her determination, she worked hard to make her one wish come true. For over a thousand years, Fatima's one wish — her school — served students and scholars from around the globe, and it continues to do so today!