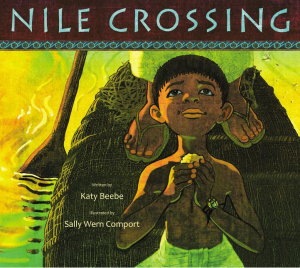 Here is a charming and delightful book, which takes us on a journey through a young boy’s day as he leaves his ancient Egyptian rural home for a teeming city and a school where he will learn to become a scribe. Written in compellingly simple non-rhyming verse, the narrative rolls along pleasantly and will make for easy oral recitation.

Waking up before sunrise, the youngster is given a protective amulet in the form of a scarab beetle by his mother. Scarab beetles were called Khepri and we are told that this is also the child’s name. Walking by his still sleeping younger sisters, Khepri follows his father to the Nile where they board their papyrus skiff and sail on the great river. Along the way, Khepri sings songs to pacify the crocodile god Sobek and the hippopotamus goddess Taueret—two dangerous water creatures—and describes the sun’s rising as the dawning of the god Khepri, which was the name of the early morning form of the solar deity. Arriving at the great city of Thebes, Khepri’s father gives him a scribal kit consisting of long thin reeds for writing and little round cakes of black and red paste which were mixed with water to be used as ink. At the school’s gate, Khepri pauses and reflects on his new life, reassured by the gifts his parents gave him and the warming power of his protective deity on his shoulders. He will not be alone on his new journey. Continue reading.

Publisher's Synopsis: A unique twist on the first day of school.

Khepri lives in ancient Egypt, happily fishing alongside his father in the waters of the Nile. But today, Khepri will have to replace his fishing pole with the reed pens of a scribe: it's his first day of school. As he and his father travel to Thebes, Khepri faces his anxieties about starting school and eventually finds a sense of peace.

From the author of Brother Hugo and the Bear, this gorgeous and poignant book delivers a relatable story in an unusual historical setting.