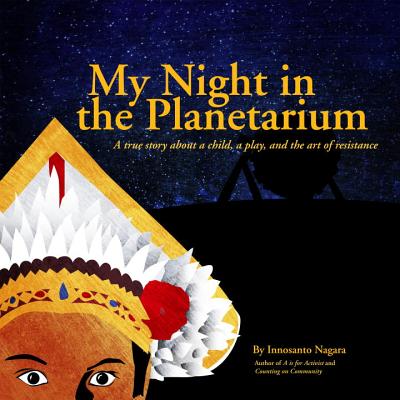 Innosanto Nagara, the Indonesian-born graphic artist and acclaimed author/illustrator of A Is for Activist and Counting on Community, tells his own story of facing dictatorship and oppression in My Night in the Planetarium.

At the age of seven, he watched his father, a playwright, put on plays that indirectly lampooned the corrupt and violent rulers of his country in the 1970s and 1980s. Sometimes the youngster acted in the plays. The most popular of them was about the king of a fantasy land who turned out to be just as bad as the foreign king the people had just kicked out. It had a long and successful run at a huge arts center that included indoor and outdoor stages, a movie theater, and a planetarium, but on the last night, the actors got word that police were massing outside to arrest them all. Continue reading.

Synopsis: 7-year-old Innosanto spends an exciting night with his mom sleeping under the stars in the Jakarta Planetarium. Innosanto's father is a playwright and the boy memorizes lines during the actors' rehearsals, so they invite him to join the performance, which tours the country. The play is about a General, who doesn't treat people very well, -so they decided to do a play about how that was wrong.- Fact: Indonesia aka The Spice Islands is the place Christopher Columbus was looking for when he crashed in the New World. Fact: Indonesia is made up of 17000 islands where people speak over 750 different languages. Fact: when Inno was a child, speaking out against the government could land you in jail. On the last night of the performace Inno packs a toothbrush (-they figured if you're going to go to jail for a long time, you may as well have your toothbrush with you so you can keep your teeth clean. (true story).-), the curtains go down, and with soldiers on the way, the actors scatter into hiding. On its surface, My Night in the Planetarium is a modern Indonesian children's story about one night in the late '70s that the author got to spend in the Jakarta planetarium. But it's actually much more than that. It's an introduction to the history and culture of Indonesia. It's about colonialism, revolution, how power corrupts, and how through art and solidarity liberation can be won.
From the eBook edition.