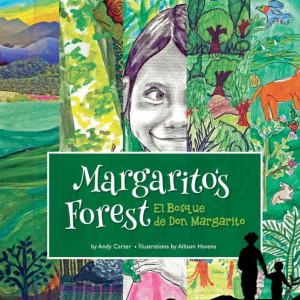 PUBLISHER’S DESCRIPTION: Margarito’s Forest, a bilingual book in English and Spanish with excerpts in K’iche’, is based on the life of Don Margarito Esteban Álvarez Velázquez as told by his daughter, Doña Maria Guadalupe. It is a story of Maya culture and wisdom passed from one generation to the next. As the devastating effects of climate change become clear, Don Margarito’s life and the ways of the Maya offer timely wisdom for a planet in peril.

MY TWO CENTS: Margarito’s Forest/El Bosque de don Margarito is a nonfiction account of a Guatemalan man’s extraordinary devotion to the forest he loved. In addition to offering a heroic and memorable story, this picture book also enriches the range of Latinx representation in U.S. children’s literature. The story takes place in the central highlands of Guatemala, among the K’iche’ people and includes phrases in the K’iche’ language. Margarito’s Forest also expands the range of truth-telling by taking on a reality I’ve never seen acknowledged in a children’s book: Guatemala’s dirty war, which brought tremendous suffering to many Guatemalans and was especially devastating for the country’s indigenous peoples. The book makes these contributions while focusing on introducing young readers to the late Margarito Esteban Álvarez Velásquez, an unsung warrior for the environment. This humble man dedicated his life to maintaining the forest near his Guatemalan home as a place of nourishment, beauty, and ancestral significance. Don Margarito often labored alone, saving trees even as many others in the region cleared them for the sake of crop cultivation, and his story offers a powerful example of the impact one person can have even when facing obstacles and indifference.

Based on oral histories shared by Don Margarito’s daughter, María Guadalupe Velásquez Tum, the narrative is set up as a conversation between Doña Guadalupe and her young grandson, Esteban. As Doña Guadalupe makes clear, her deep knowledge of the forest came from Don Margarito, who received it as a boy from the village holy man, Don Calixto. By emphasizing this chain of communication, the text also elevates the importance of transmitting family lore and practical wisdom to younger generations. It also offers valuable opportunities to recognize bodies of knowledge and practice that are often marginalized or belittled in mainstream narratives.

As mentioned, the story also touches on a deeply troubling passage in Guatemala’s recent history. For thirty-six years, beginning in 1960, Guatemalans endured a “dirty war” in which government military forces were deployed against citizens. During this protracted horror, indigenous peoples suffered disproportionate losses at the hands of government soldiers, including deaths now classified as genocide. According to the Commission for Historical Clarification, the Guatemalan government often scapegoated Maya communities, and this was the precise fate suffered by the village where Doña Guadalupe and Don Margarito lived. Tragically, when Guatemalan forces raided their home village, Don Margarito was among those killed. Continue reading.

Publisher's Synopsis: Margarito's Forest is based on the life of Don Margarito Esteban Álvarez Velázquez as told by his daughter, Dona' María Guadelupe. This story of the Maya love for the earth, passed from one generation to the next, is set in Saq Ja', a small, remote village in the mountains of central Guatemala. As the deforesting effects of climate change become clear, Don Margarito's life and the ways of the Maya offer timely wisdom for a planet in peril. This book is a commemoration of his courage and the preservation of the forest that he planted.