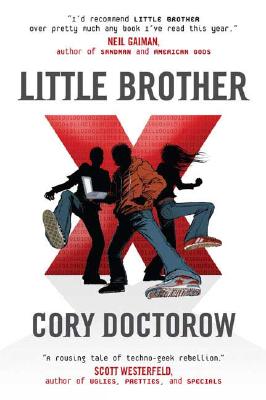 Set in the very near future, Little Brother goes to technological places that Orwell’s Big Brother could not. Students that have read 1984 will love the references to Orwell’s original and will appreciate the upgrade.

After a major terrorist attack in San Francisco, 17-year-old hacker extraordinaire, w1n5t0n (pronounced “Winston”) is arrested by a Department of Homeland Security that has gone on a civil rights-crushing campaign to fight “terrorists.” In no time our clever protagonist realizes that the DHS is the real enemy of the American people, although these same American people roll over and endure the loss of rights so that they can feel safer. Sound familiar?

Shortly after the government crackdown, a group of high school kids figure out how to circumvent the surveillance techniques of authorities and launch a movement to jam the system (and not trust anybody over 25, Woohoo!).

This is a young adult novel, so there are some nifty little history lessons about the Free Speech Movement, Emma Goldman, and others along the way. Just watch what happens to the teacher that dares to teach the kids about past mass citizen movements. Throw in a little teenage insecurity about friendships and the opposite sex and the clueless-ness of adults and you have a book that teenagers should love. Rebellious adults will also have a hard time putting this book down, even if it is geared toward the more technologically savvy younger generation.

Publisher's Synopsis: Marcus, a.k.a "w1n5t0n," is only seventeen years old, but he figures he already knows how the system works–and how to work the system. Smart, fast, and wise to the ways of the networked world, he has no trouble outwitting his high school's intrusive but clumsy surveillance systems.
But his whole world changes when he and his friends find themselves caught in the aftermath of a major terrorist attack on San Francisco. In the wrong place at the wrong time, Marcus and his crew are apprehended by the Department of Homeland Security and whisked away to a secret prison where they're mercilessly interrogated for days.
When the DHS finally releases them, Marcus discovers that his city has become a police state where every citizen is treated like a potential terrorist. He knows that no one will believe his story, which leaves him only one option: to take down the DHS himself.