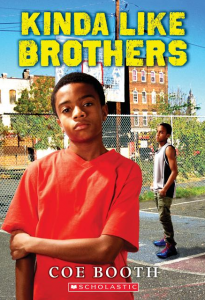 Kinda Like Brothers is New York novelist Coe Booth’s first book for middle-grade readers, and it is told from the point of view of an eleven-year-old boy who has asthma. Jarrett is struggling to keep up at school and to show the other boys that though he may be smaller, he is tough. In the midst of his difficult transition from child to young man, Jarrett’s mom takes in Kevon. Kevon is a foster kid who is a lot like Jarrett except a little older, a little taller, a little more confident with girls and better at sports. Jarrett hates him. Kinda Like Brothers is a pacey, touching look at foster care from an adolescent perspective.

Jarrett’s asthma—a condition of the airways that can make it harder to breathe—is not the character’s defining characteristic. Asthma is well integrated into the plot and his experiences, and explains some of Jarrett’s difficulties at school:

Every time I had a bad asthma attack, I had to stay home from school for a day or two, and then when I went back, I never knew what they were doing. In sixth grade, I missed sixteen days. All because of stupid asthma.

Jarrett finds having asthma very annoying. As someone who was diagnosed with asthma when they were around 11 years old, I felt this. It was freaking annoying. Inhalers—the most commonly used form of asthma medication—have a legacy of being used in movies and television as short-hand for “weak”, “anxious” or “nerdy.” My local pharmacist tried to dress up my “puffer” by housing it in a huge rubber Lisa Simpson accessory, but even this hit of obvious street cred couldn’t hide that an inhaler was desperately uncool. Plus, the Ventolin puffer I was on at the time was impossible to use discreetly. You had to shake it up before each use, which came with a loud spray-can-rattle, and then push all the air out of your lungs before you took a puff. The “puff” involved pressing the inhaler to your mouth, squeezing down on the metal canister (which made a sound like a bike pump) and heaving in a deep breath at the same time. The rattle and puff of using it gave you away on the playground. Continue reading.

Publisher's Synopsis: Jarrett doesn't trust Kevon. But he's got to share a room with him anyway.It was one thing when Jarrett's mom took care of foster babies who needed help. But this time it's different. This time the baby who needs help has an older brother -- a kid Jarrett's age named Kevon.Everyone thinks Jarrett and Kevon should be friends -- but that's not gonna happen. Not when Kevon's acting like he's better than Jarrett -- and not when Jarrett finds out Kevon's keeping some major secrets. Jarrett doesn't think it's fair that he has to share his room, his friends, and his life with some stranger. He's gotta do something about it -- but what? From award-winning author Coe Booth, Kinda Like Brothers is the story of two boys who really don't get along -- but have to find a way to figure it out.